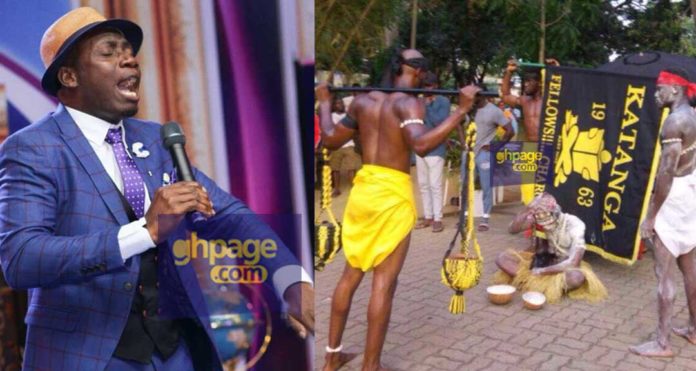 Counselor George Lutterodt has angrily descended on the rioting students of Kwame Nkrumah University of Science and Technology who destroyed the University’s properties during their demonstration.

Speaking to Kwaku Owusu Adjei on Anopa Kasapa, on Kasapa Fm, Counselor Lutteordt who couldn’t believe students who are being trained to lead Ghana into a prosperous future will actually destroy their school’s properties just because they have a misunderstanding with the administration.

Counselor Lutterodt further stated he expected them to burn their own clothes and walk n#ked since they were venting their anger but to destroy properties of the school is something he never expected future leaders to do.

“How on earth, should students be angry and in their anger, they didn’t destroy their own clothes but the properties of the school and we are looking at them.”

“These are people we are raising to become future leaders and this is how they can force situations, then what are we wasting our money for? it is a waste of resources…Why should people be angry and destroy school properties, if you are angry, go into your dormitory, carry the bag your father bought for you, your trunk, come outside, buy your own matches and burn your dresses”. counselor Lutterodt added.

“We have people blaming the Vice-Chancellor for what has happened and I sit back and ask what on earth is going on in our country. This level of indiscipline is becoming too much in this country and someone must stand against it” firmly stated.

On Monday 22nd October, a peaceful demonstration led by the SRC leadership of KNUST to protest some decisions made by the authorities of the school turned bloody. Several properties of the school were destroyed by angry students.

The rioting was only stopped by the military who were invited to the school by the Ashanti Regional Security Council after the police failed to tame the angry students.

The school has since been closed down indefinitely by the administration and all students sent home. However, a new report has it that, the government has dissolved the KNUST Council and the Vice-Chancellor has been told to step aside for now.

The interim board has been given a deadline of 14 days to ensure the students are back to campus and academics is back in session.

‘Why the crab has no head’-Delay subtly jabs Afia Schwar for causing Moesha’s madness?