Video: Counselor Lutterodt Reveals Why He Was Heartbroken To Hear About Yvonne Nelson’s Baby 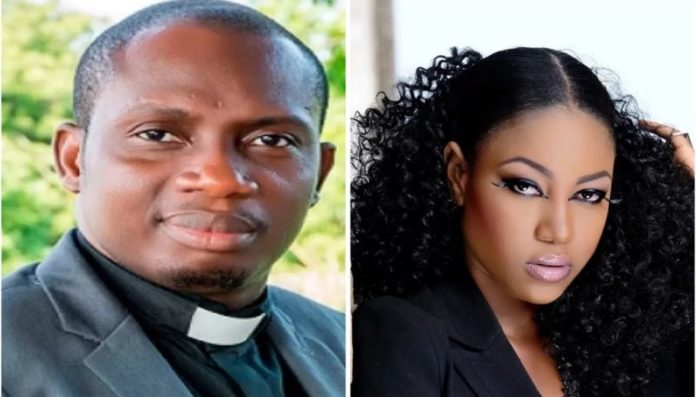 Controversial relationship counselor, Counselor Lutterodt has revealed why he was so much heartbroken and feels disappointed upon hearing Yvonne Nelson’s pregnancy and delivery after his return from the US.

READ ALSO: President On Grill As Christian Council Seeks For Declaration Of Stance On Homos3xuality

Actress Yvonne Nelson in the mid of this year down to the end has faced the wrath of some Ghanaians and Nigerians over her early unknown pregnancy father to the revelation of the alleged snatched husband.

However, it seems Counselor Lutterodt was not perfectly aware of the genesis of this matter and has now come to fan the flames by revealing his much disappointment and heartbroken moment on this issue.

In a hot interview with Amanda Jisseh on GH One Television, Mr. Lutterodt expressing his interest and disappointment revealed that he was totally in love with the actress and admired her very much.

He continued to add that even though he did not have anything against the actress engaging herself in sexual intercourse day in day out, it was unethical for her to experience pregnancy out of wedlock.

Answering to a question asked by the host on any available alternative for Yvonne Nelson aside moving with the pregnancy, he replied that he was not in support of abortion but was totally against pregnancy out of wedlock.

The Counselor went on to express his feelings that it really pained him when he heard about Yvonne’s child delivery.

READ ALSO: For the first, Kofi Adjorlolo opens up on his relationship with Victoria Lebene – Tells what really happened

With an admonishing speak, he explained that Yvonne Nelson as an actress was seen as a role model to many people, so it was not right for her to get pregnant in that situation because it wasn’t a good example to those who look up to her as a praiseworthy figure.

Counselor George Lutterodt is well-known for his outspoken way of counseling and many people see him as a very controversial and ‘annoying’ counselor who always want to be heard.

Well, he also disclosed in the interview that it was an influence of God that control him to take up that approach to help many people.

READ ALSO: 6 Best Ways To Avoid Pregnancy When You Are Not Ready To Have A Child|#5 Is The Easiest

Watch The Interview In The Video Below……..

Not interested in the first show?….skip by forwarding it to 1:50, to watch the interview.