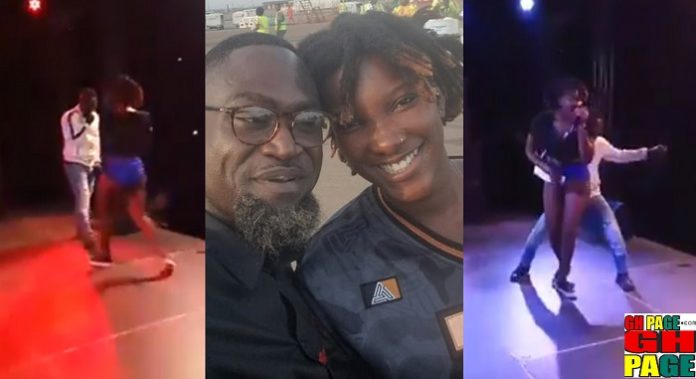 The much anticipated Mamba Bash happened yesterday,10th November 2017 at the Baba Yara Sports Stadium in Kumasi.

Artistes who were billed and mounted the stage were Stonebwoy, Ebony Reigns, Flowking Stone, Yaa Pono, as well as the ‘One Corner’ hit singer, Patapaa.

However, one incident that, patrons of the event were eager to see was the Songo and Ebony clash.Prior to the event, there was much hype on Countryman Songo, who openly declared his intentions to ‘fire’ dancehall sensation Ebony at the ‘Mamba Bash’.

Dancehall sensation, Ebony, also thrown a challenge to Adom TV/Asempa FM’s Countryman Songo to meet her in Kumasi to prove his intentions to “fire” her.

“Tell him to meet me at the Mamba Bash this Friday at the Baba Yara Stadium if he really means what he said,” the ‘Sponsor’ hitmaker said.

The D day came and the two finally met at the bash.Interestingly, Ebony climbed on stage with the newly crowned winner of RTP Sports Presenter of the Year Award, Countryman Songo.—And “doolley-doolley” it was a “fire.”

Songo was all around Ebony and the “date ur fada” hitmaker who obviously is much experienced with such things was busily whining her waist to Songo to the amusement of the crowd gathered.

READ ALSO:[Photos] These Are The Lavish Houses Ghanaian Female Celebrities Live In

Below is the video

Also, the two, Countryman Songo and Ebony shared photos hanging out together even before the show.