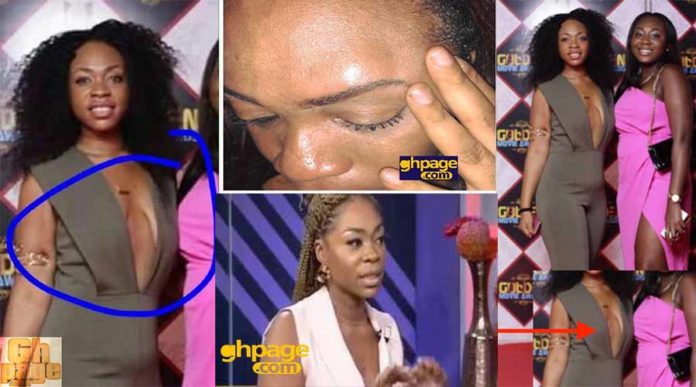 Baby mama of Shatta Wale, Diamond Michelle Gbagonah aka Shatta Michy but now preferred to be called Michy Gh says she cried for two days when some social media users trolled her of having flat boobs.

According to her, the trolls broke her down, got to her for two days and was done crying.

Wardrobe malfunction enabled curious eyes to behold the fallen boobs of Diamond Michelle Gbagonah alias Shatta Michy when she stepped out for the 2016 Golden Movie Awards at the Kempinski Hotel in Accra.

Then, being the girlfriend and baby mama of a notable musician like Shatta Wale came with its perks and attention. It would, however, be recalled that Shatta Michy endued an ‘unending’ trolls who pointed out her sagging breast.

Most people who commented on the picture which went viral on Social Media questioned why a young lady under 30 years would have such a ‘fallen’ breast — though, she is a mother of one.

Shatta Michy on Berla Mundi’s show on GhOne Tv discussing ‘Social Media trolling-who to blame?’ disclosed there has been a lot of body-shaming trolls on her on the internet that has gotten her angry, sad or broken.

The notable one is that of her ‘fallen’ boobs which she claimed got to her for ‘like two days and I was done crying”.

“It was other women body-shaming me that actually got to me because I don’t do that to other girls. I feel like we have grown up, that’s for kids, High School. We need to support each other because I don’t mind if its the men because the men can say whatever they want but woman to woman, that got me.” Michy added.

She also indicated that she has now grown up from there where she now mostly ignore comments and trolls from people who are always looking for flaws on her.

Michy now seems to have gone under the knife—Sort of done some implant to uplift her sagging boobs. The once fallen is now straight and firm. (See more photos)

Akua GMB blocked me after her brother scammed me Ghc8,000 for marriage – Lady claims

A Ghanaian lady has alleged that a young man named Kwame Fosu who happens to be the younger brother of Akua...
Read more