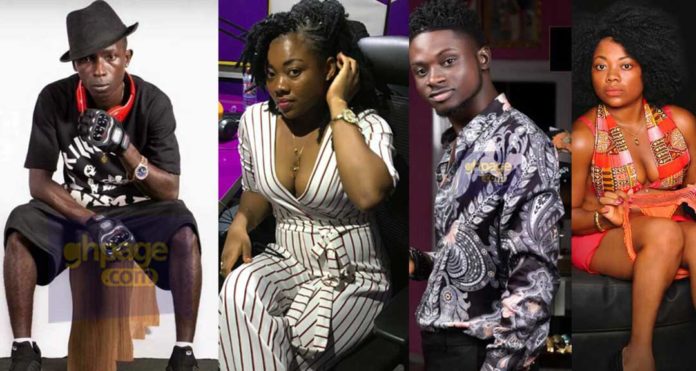 Fast-rising Ghanaian female Afro Pop who goes by the name CT Baby has boldly confessed she would love to sleep with both Kuami Eugene and Patapaa if the chance avail itself.

Speaking to DJ Foxx on Top FM 103.1, the beautiful actress revealed that she has a huge crush on Patapaa because she loves the general personality of the “Corner Hitmaker”.

For Kuami Eugene, CT Baby explained that she loves the swag the “Angela” hitmaker exhibits when he is on stage performing.

CT baby left the host and other panelists, as well as her manager, dumbfounded when she confessed she wouldn’t say no to an affair with any of the two artists.

However, it is not clear if she meant having both of them on a bed at the same time or one at a time. In any case, she gets vim and we give her the applause.

WATCH CJ IN THE STUDIO OF TOP FM BELOW

CT Baby and her manager, Sycho Brown were at the studio of Top Fm to promote her new song title Dross(Panty). CT Baby explained the song advises women to marry before having sex.

Interestingly, she claims she wouldn’t hesitate to sleep with Patapaa or Kuami Eugene even though she is not married to either…Very interesting.