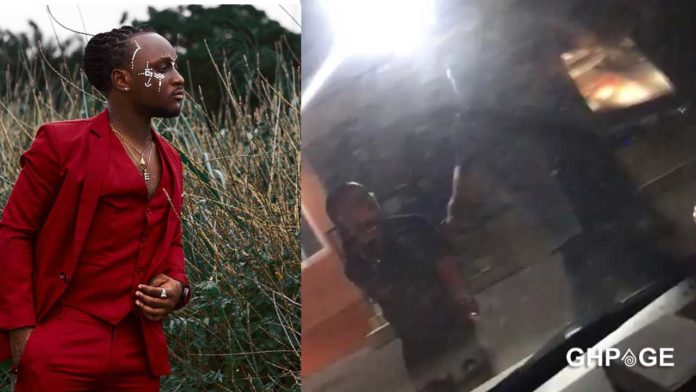 Dancehall artiste and painter Epixode according to information reaching us has been arrested by the Ghana Police.

We are yet to get the main reason for his arrest but so far a video of his “Rambo-style” arrest has surfaced on social media and people are talking about it.

In the video, the dancehall musician was seen being heckled by the police as they carried him away.

The video got a lot of reactions from some of his fans who expressed displeasure over how things were handled by the police.

Read the comments below:

@abena_may complained about the police: “Hmm the say the police is our friend buh I don’t see their friendship.”

@lemo_otedola had this to say: “Did you say common, we are all common, the police is ur friend when you are not guilty wai.”

@iam_ashkari11 commented: “The police is our friend bt Ghana police are something else.”

@dominickie20 expressed sadness at the issue: “This is sooo sad…I wonder what this cool guy did.”

@kun.605 quizzed the action of the police: “Ahhh wat is wrong with gh police? This is totally wrong hmmm.”