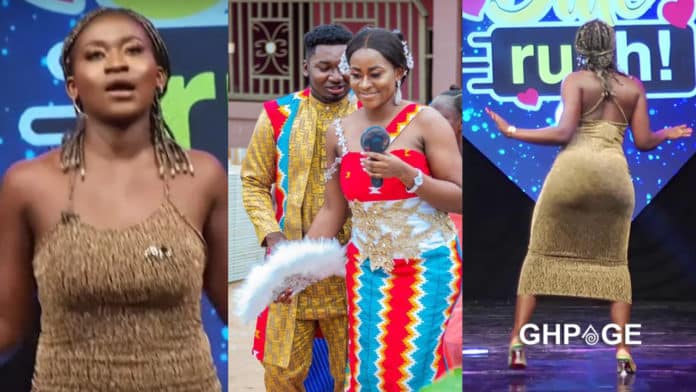 The marital status of another Date Rush participant who claims to be single and searching for love has been uncovered after appearing on the TV3 reality show.

Nana Adwoa made her first appearance on TV Sunday, May 15, 2022, sending all the 10 ten men who had lined up on stage and viewers into a frenzy with her big butt.

In her profile video, she said she owned a gym and a pub but the only thing missing in her life was a man as her previous relationship with her ex-boyfriend ended after she found out he was cheating on her with another lady.

The 24-year-old curvaceous lady settled on Raymond as her date, which left one of her admirers close to tears that he wasn’t chosen instead.

GHPage can exclusively confirm that Nana Adwoa is a married woman with a child.

Apparently, Nana Adwoa got married in the year 2021 at Konongo in the Ashanti Region to an up-and-coming musician well known as 2 Shy, who currently lives abroad.

The husband’s name may ring a bell in the ears of many music lovers because of his one-time hit song titled Azonto Girl.

It is immediately not clear why a married Nana Adwoa appeared on the programme meant for single people looking for genuine love and potential relationships.

This shocking revelation has left many people jaw-dropped, especially after it comes only weeks after 2 Sure was exposed over a similar incident.

Watch the video to know more

Following the development, some regular viewers of the reality show have accused the organisers of not doing due diligence to audition persons genuinely not in any form of relationship.

Others have argued that the show is gradually losing its relevance as it has been transformed into a platform to catapult people to fame overnight.

See more photos from the marriage ceremony below:

Some believe Nana Adwoa’s one-year-old marriage may have been short-lived as she could truly be single and hoping to find love again.

To give her the benefit of the doubt, we would wait for the Season 6 Reunion where she will clarify herself.