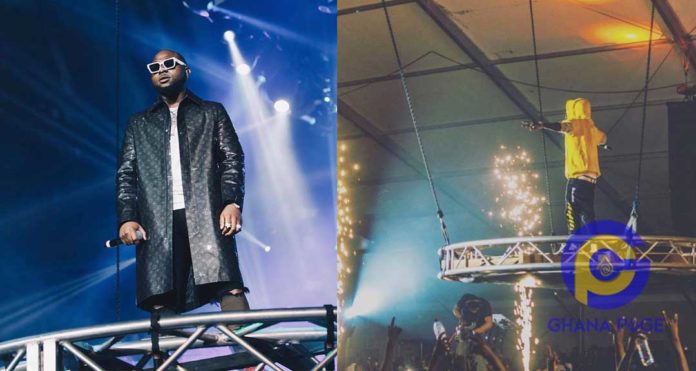 Shatta Wale has been mocked by Nigerian musician Davido after Shatta Wale copied his entry for O2 Concert in January for his own entry for the recently held 3 Music Awards 2019 in Ghana.

Shatta Wale who was the first musician to perform on the night gave a spectacular performance on the night when he gave a magnificent levitation entry onto the stage in a metal pan customized with 3 Music Logo.

Shatta Wale has been praised for such an amazing entry but it has turned out it was just copied from the Nigerian musician.

Sharing Photo from Shatta Wale’s entry on his Snap, Davido wrote: “Shatta I love you but (and added laughing and shocked emojis).

Normally, this wouldn’t have been any big deal but it has shocked many that Shatta Wale who has been attacking video directors in Ghana for weeks now for copying Nigerian musicians style could also copy from Nigerians.

Recently, Shatta Wale even threatened to beat Ghanain video directors if they do not cease copying Nigerians and here we see him copying Davdo blindly and with impunity. But what can we say, Shatta Wale will always be Shatta Wale.