Delay forced me to dump my white boyfriend – Afia Schwarzenegger 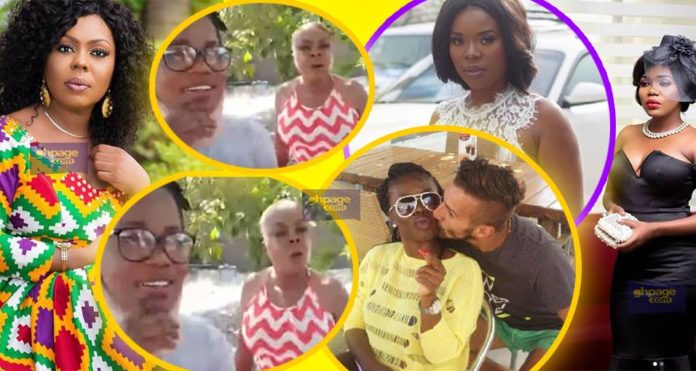 It looks the feud between Afia Schwarzenegger and her former best friend, Deloris Frimpong-Manso (Delay) is not over as Afia’s recent revelation on Mzbel’s facebook live points to more animosity between them.

The Popular Ghanaian comedienne and TV host, Valentina Nana Agyeiwaa, known in the showbiz as Afia Schwarzenegger, has disclosed that her onetime best friend, Deloris Frimpong Manso aka Delay, influenced her to break up with her white boyfriend.

READ ALSO: “All Delay Knows Is Jumping From One Hotel To another seeking White men” – Actor Tornado

In a Facebook Live video, she revealed to Mzbel that before she became Afia Schwarzenegger she was dating a white man from Australia.

According to Afia, Delay informed her if she comes on TV and is seen dating a white man, people will say she is a prostitute, so should break up with him.

“I went with Delay, by then the white man was working in Australia, but we met in South Africa, and I came to Ghana with him. so I went to his house with Delay to break up with him.” She said

“He nearly cried, but I told him, ‘you can’t pretend to be crying, you can’t blackmail me’, and Delay advised that we walk out on him and bang the door behind us”. Afia continued

Afia indicated she later found out Delay was chasing a half-cast shortly after she had influenced her Afia to dump his white boyfriend, Bruce — Which she added made her regret her actions.

READ ALSO: Find out the Jobs your favorite Ghanaian Celebrities did before the Fame

“Delay had a boyfriend called Kobby, but the next day we were going to Kumasi and I caught her proposing to this half-cast boy called George, he’s not even half-cast, he’s ‘quarter-cast’. She asked that I leave my white man and this woman was here proposing to ‘quarter-cast’.They even had sex that same day.”

Afia said she will never forgive Delay for that and cursed, “She [Delay] will not see heaven gate.” Afia also noted that she is ready to invoke curses if Delay ever comes out to deny.