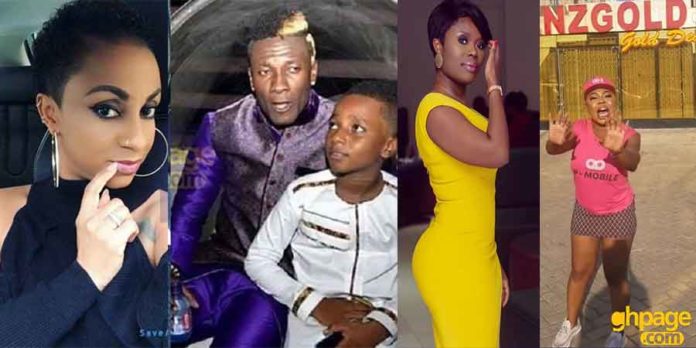 The outspoken and controversial presenter and comedienne, Valentina Nana Agyeiwaa popularly known as Afia Schwarzenegger has disclosed on her show that Gifty Gyan, the estranged wife of Black Stars captain Asamoah Gyan took him to ‘juju’ specialist to cast a spell on him.

She added that it was Deloris Frimpong Manso, popularly known as Delay who revealed it to her.

“They have been together since 2003 and it was after Gifty gave birth to their second child that Asamoah Gyan performed her marriage rites”, she added.

She also made it known that for some months now Asamoah Gyan has packed out of their house and is no longer living with Gifty because he believes the children they have are not his.

The controversial comedienne also stated that the woman alleged to be dating Asamoah Gyan now is very rich hence the decision to divorce his wife.

Afia further stated that Baffour Gyan, the brother of Asamoah Gyan has seized the UK passport of Gifty so she will not be able to go to her husband’s house to enable Asamoah to go about his new relationship freely.

Recently, the Black stars captain filed for a divorce from his wife of over 15 years and also ordered for a DNA test to be conducted on his children to determine their paternity.

They have been married for over 15 years and they have three beautiful children together, two sons and a daughter.