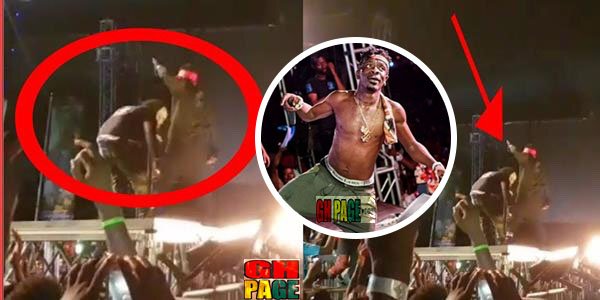 By now everybody knows that Shatta Wale the self-acclaimed Dancehall King during his performance at the recently held S-Concert slapped his bodyguard, Biggie Sparta on stage.

The 4th edition of the annual S-Concert organized by EIB Network was held on Friday 1st December 2017 at the Accra Sports Stadium. Over 50 musicians were billed to perform on the night.

Among the artists who performed was Shatta Wale. During his performance, a fan jumped on stage and held Shatta Wale’s leg. Biggie Sparta, one of the bodyguards of Shatta Wale quickly moved in and pushed the fan off the stage but he was met with a heavy slap from his boss.

SEE ALSO: S-Concert: How Samini and his boys planned to pull down Shatta Wale for staying too long (Video)

Now, many have attributed different reasons to why he disgraced Biggie Sparta in such a manner in front of over 3000 people. Biggie Sparta has been with Shatta Wale for over 5 years so it beats people’s imagination as to why Wale will treat him so bad.

Interestingly, it appears Shatta Wale camp is as confused as ever. Shatta Wale in an attempt to justify his actions seems to be contradicting issues.As it stands now, Wale has given 5 different and contradicting reasons for his stupid action.

1. Explaining why he slapped his bodyguard on the S-Concert stage on Peace FM, Shatta Wale stated that he slapped him because he was abusing his fan who was only trying to hug him. He said:

“I slapped him because he harassed my fan who was trying to just hug me.I love my fans!”

2. Hours after S-Concert, Shatta Wale in a Live Facebook Video explained that he slapped Biggie Sparta on the stage because he breached security code by allowing a fan on the stage. He said:

3. Shatta Wale a day after the show where he slapped his bodyguard in another Live Facebook Video said that it’s a publicity stunt and they rehearsed for weeks before the day. (I wonder if the fan climbing stage is also part of the act…lol). Wale said:

“It was a stunt, we rehearsed it for like one month before we acted it”

4. Speaking on Zylofon FM, Shatta Wale revealed that slapping Biggie Sparta on the stage had nothing to do with the fan. To him, it’s something they had the plan to do a month before. He said:

“I didn’t slap him because of the fan who climbed the stage. It was all planned a month ago”

SEE ALSO: This Is What Criss Waddle Has To Say About Shatta Wale Slapping His Bodyguard [Video]

5. The baby mama of the self-acclaimed Dancehall King, Diamond Michelle aka Shatta Michy also had this to say as to why Shatta Wale slapped Biggie Sparta on stage

“Why are some people hypocrites like that? Imagine this had been a different situation God forbid headlines would have been “ fan stabs shatta at show’ and that’s where your fake asses would have been saying sorry left and right. To avoid a situation like that, security should have been on his eagle eye and since he didn’t, man who is hot as ever did what he feels would let him remember never to lose guard again .. stop the shallow thinking. We talking security here. Anything could have happened”

WATCH THE VIDEO OF THE SLAPPING BELOW