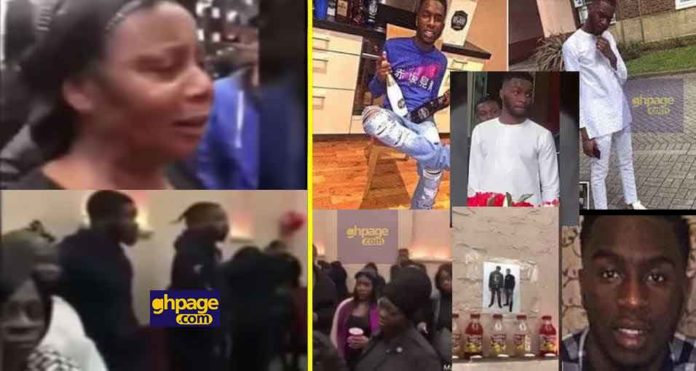 Elyon Poku who was popularly known as DJ Nana Banger was been stabbed during an out of control party at Stamford Hill, Hackney, in the UK around 12.50am on last Saturday.

The police believe that Nana Banger was at a party with about 100 others along with three others, was injured at the gathering.

The 20-year-old was identified by friends online, including midfielder Timothy Fosu-Mensah after he was killed.

Fosu-Mensah posted a still from the video on Saturday saying ‘RIP to you my brother…love U may god bless U @nanabanger’ with two crying emojis and a rose underneath.

Jordan Henry, a friend of the birthday boy said: ‘It was an 18th birthday party of one of my friends and the invitation just went round to too many people and over 100 people showed up.’

‘It was posted on social media and everyone showed up. ‘The neighbors said they saw two boys fighting outside and then one of them who was stabbed ran back inside.’

‘Once everyone knew what it was they started running and screaming down the street, it was like a riot. It was crazy.’

Many paid respect to the talented DJ, who has only been named by his stage name, on Twitter.

The 20-year-old man and another teenager, 17, were found with stab injuries and rushed to the hospital, but the older of the two was pronounced dead at 4.30am.

Police and the London Ambulance Service raced to the party after receiving reports of a fight and administered first aid to Mr. Poku before he was taken to the hospital.

Police said one youth, a 16-year-old boy, and another man, aged 29, were arrested on suspicion of murder on Monday.

Another teen, 18, and a 28-year-old man have also been arrested following the party, on suspicion of affray.

Watch a video below of the commemoration from Nana Banger’s family;

Although officers have made arrests, the force said it needs to speak to everyone who attended the party, on Wilderton Road, as they might “hold vital information”.