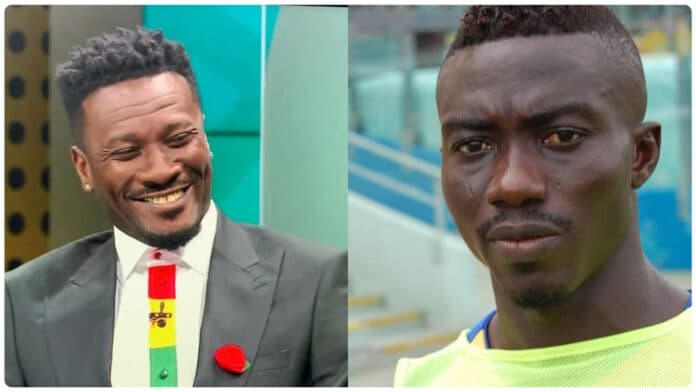 Asamoah Gyan has recounted the critical role Daniel Don Bortey played in the early days of his career.

According to the former Black Stars skipper, Don Bortey is a kind-hearted fellow who once gave him loads of cash.

Asamoah Gyan said he was shocked at the time considering the amount of money Don Bortey asked him to pick out of the backpack he was carrying.

Recounting the moment, Asamoah Gyan intimated that he appreciated Don Bortey for everything he did for him at the time and the money he gave to him freely, even though he promised to pay it back.

He is a free-spirited man, and he has benefited me. Dong Bortey was at the height of his game in those days. In an interview with Dan Kwaku Yeboah, Gyan remarked, “I recall we were in camp when he came with a rucksack full of money.

We were friends, but we weren’t very close, so he let me take what I needed out of his luggage. I was quite shocked.

“I took out a large sum of money and promised him that I would pay him back for his good deeds the day I also became wealthy.

“He is someone who can offer you $100,000,000 if that is the last money he has left. I’m feeling a little emotional… Despite the fact that few people genuinely know him, he acts with sincerity.

“Things happen in life. He was intended to be up there. People are unaware of my friendship with him, yet we occasionally communicate. He is a decent man.

Daniel Don Bortey remains one of the exemplary legends of the Ghana Premier League. He became a household name when he joined Accra Hearts of Oak and helped them win the league and the CAF Super and Confederation Cups.