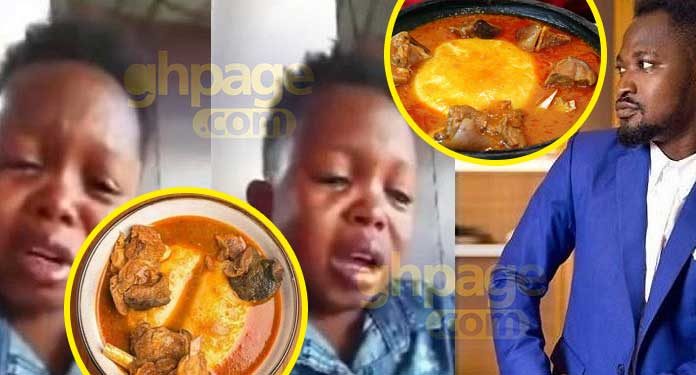 Yesterday we reported on Diminutive Kumawood actor Don Little begging the public to help him apologize to his godfather Funny Face as the strained relationship between him and the comedian is a source of worry to him.

According to Don Little, he has wronged Funny Face and he doesn’t feel well when he(Funny Face) sees him(Don Little) and pass away without asking how he was or even if whether he has eaten like he used to do before.

Don Little in the video posted on Facebook, pleaded for forgiveness from funny face over an unknown act.

But, in an interview with Zylofon FM, the diminutive actor explained the tension between him and his boss, Funny Face is because of FOOD. Yes, you heard it right, because of food.

According to Don Little, he accompanied Funny Face to a program and they returned very late but he did not bother to ask him if he had eaten.

“So, he asked me a question and I didn’t mind him. The following day, he told me to leave his house. Since then he never called me” he added.

He debunked rumours that Funny Face was benefiting from his craft and never paid him.

“Funny Face was the one who brought me to stardom and now if we are talking about stardom me Don little I’m part of it so I wouldn’t do that to him…” he said.

Reacting to a song he released to jab Funny Face, Don little said the song was directed at individuals who claimed to be rich yet refuse to help those in need.

read this: This is what Shatta Wale’s daddy did to him when he stole his car

“The song I did was to advise people who are rich. I advised them to help the youth and stop making noise with their wealth. I sent the song to my boss (Funny Face) so he would help shoot the video. I can never do a diss song to my boss” he added.

Don Little said due to the argument, movie directors close to Funny Face no longer give him any roles in their productions which has led to a huge financial blow.

“I’m pleading with anyone close to my boss Funny Face to beg him and ask that I love him so much. He remains my boss. He’s fed and clothed me before. I’d been selling by the roadside when he saw. I’d starred in several movies but never made it to the limelight. He brought me to the limelight after featuring me in short videos. I’m asking that he forgives me and let go whatever has transpired,” he said.

read more: 12 Fraud boys hit Gh¢326 Million but they were arrested by Ghana CID when they went to withdraw from bank