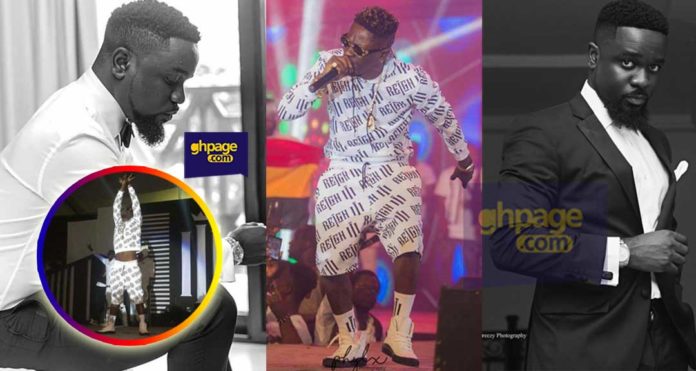 SarkCess music CEO, Michael Owusu Addo known in SHowbiz circles as Sarkodie has sent what looks like his second advice to Shatta Wale asking him not to bring others down when bragging.

In an interview with KOD on Starr FM, Sarkodie who prior to Shatta Wale’s Reign Album launch released a diss song dubbed Advice defended Shatta Wale’s bragging attitude stating that the dancehall artist has the right to brag since it’s part of Showbiz.

According to him, Shatta Wale brags and that’s what works for his brand but advised that his bragging shouldn’t be about bringing others down.

Read this: Kuami Eugene and Wendy Shay spotted ‘smooching’ each other

“But there are things you can brag about, but you don’t brag when you are pushing others down. It’s showbiz but doesn’t try to step on other people. And these are things we have discussed on the phone many times. The fact is I’m not into this fake industry thing so I don’t really open up to people but I’m really cool with Shatta just as it was with Castro. The truth is I do care about him (Shatta), my mum talks to the both of us on the phone and we can be on phone for hours,” Sarkodie told KOD on the Zone on Starr FM Tuesday.

Sarkodie’s “My Advice” is a song loaded with heavy punchline content believed to be directed at dancehall artiste Shatta Wale.

The song was weaved as a reply to Shatta’s numerous diss comments made on the rapper through his reign album launch journey.