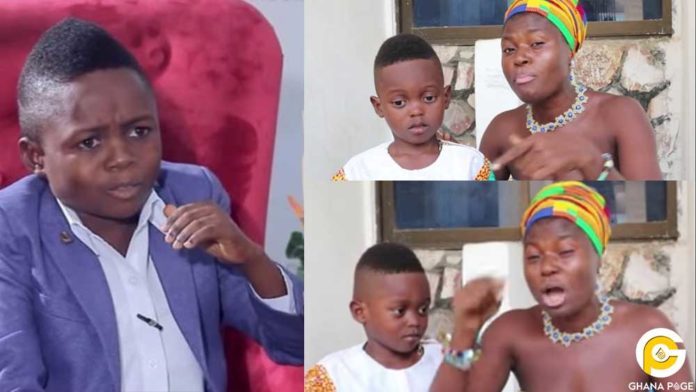 Samuel Yaw Dabo has reacted, replied the lady who claimed she is the baby mama of the diminutive kumawood actor who she has a five-year-old son with.

According to Yaw Dabo, the lady is a blatant liar who he knows nothing about.

The actor believed some people are behind, using her to tarnish his image just as another Kumawood actress came out to make a wild allegation that —she will curse him if he denies ever dating her.

Reacting to the striking resemblance he shares with the ‘son’, the actor repudiated he doesn’t even resemble him that much as people might perceive.

Yesterday,GHPAGE.com published about the supposed baby mama who identified herself as Akua Adom.

She was seen sitting and talking angrily as a little boy stood beside her. She claimed to have gotten pregnant for Yaw Dabo sometime ago but the actor told her not to mention his name at the time because things were not going well with him financially.

According to Akua Adom, Yaw Dabo has refused to come back and take care of the child as promised even though the actor seems to be doing well now.

Akua continued that she had been seeing Dabo on TV regularly and it meant everything was fine with the actor and thus he must take up his responsibilities.

Yaw Dabo has however denied all these and has challenged the supposed baby mama to come and face him if she still insists he is the dad.

Songstress Sista Afia who came to be a known brand in the music industry after she featured Dancehall artiste Shatta Wale on...
Read more
Entertainment