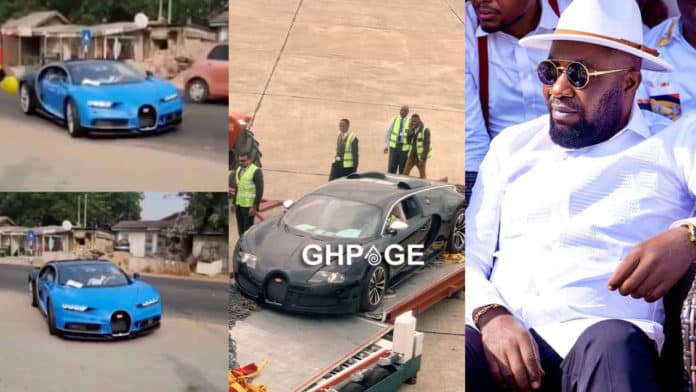 Massive reactions have greeted a photo of another expensive vehicle from French automobile maker, Bugatti, that has allegedly arrived on the shores of Ghana.

This comes after Ghanaian millionaire, Dr. Osei Kwame Despite spoiled himself earlier this month with the 2022 Bugatti Chiron Super Sport as he climaxed his 60th birthday.

The model of the newly arrived car has been identified as the regular Bugatti Veyron 16.4. Of those Veyrons, only 252 were ever produced from 2005 to 2011.

GHPage cannot confirm if this picture was taken at a Port in Ghana as purported.

Check out the photo below

The picture of the car was uploaded to Twitter in a now-deleted post by a young man who questioned government over revenue mobilised on importations at Ghana’s Ports.

His enquiry was to downplay the government’s insistence on passing the Electronic Transaction Level (E-Level) which has faced massive rejection from Ghanaians.

Mr Frimps said: “Our harbor is being sold by the previous Government, we don’t have fully control over our Airport. It was sold to one tycoon Frenchman called Vincent Balloré.”

Jagbesie Jibriel wrote: “People have too much to pay the government”

One other person wrote: “Dem for start dey upgrade the OS for plenty roads W16”