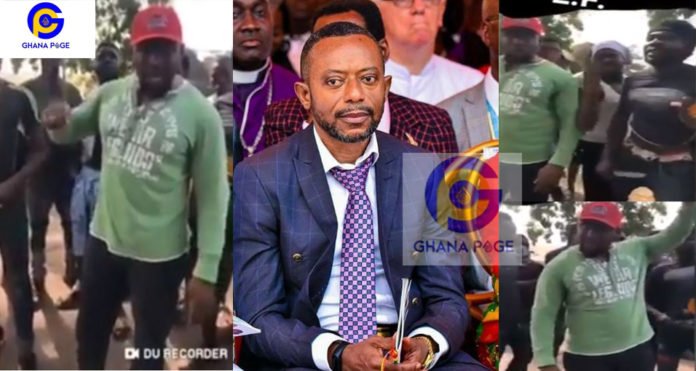 A group of angry Muslim youth has sent a strict warning to Rev Isaac Owusu Bempah to render an apology over his recent doom prophecy about the National Chief Imam.

This threatening message comes after an earlier attack on his church where properties were vandalized by the irate machete-wielding youth in protest against the prophecy.

Signboard at the church premises, glass windows and other properties in the main auditorium were destroyed in the cause.

Read Also: Hilarious scene when Owusu Bempah’s gateman fled in only a towel around his waist

He also insisted he’s seen revelations that suggest former President John Mahama and Dr Mahamudu Bawumia may die in 2019 and advised them to pray to avert it.

The prophecy went to the extent of him predicting that the country will bury an ex-president and a former first lady.

However, these prophecies, especially the one about the Chief Imam triggered the Muslim youth to attack his church and have later threatened to deal with Rev Owusu Bempah if he fails to apologize.

In a video going rounds on social media, the disturbed youth have given the controversial man of God, a 24-hour ultimatum to withdraw his prophecies of doom or experience worst attacks.

The youth led by a well-built ‘spokesperson’ threatened to attack Rev Owusu Bempah and shed his blood if he fails to do the honorable thing and further cautioned him against predicting doom for any member of the Islamic community.

“We’re warning you. You have only 24 hours to capture yourself in a video to apologize to all Muslims. Don’t bring your fake prophecies on the Muslims or our Chief Imam. If you don’t apologize, we’ll drink your blood,” the leader of the group emphasized while others rant at his back.