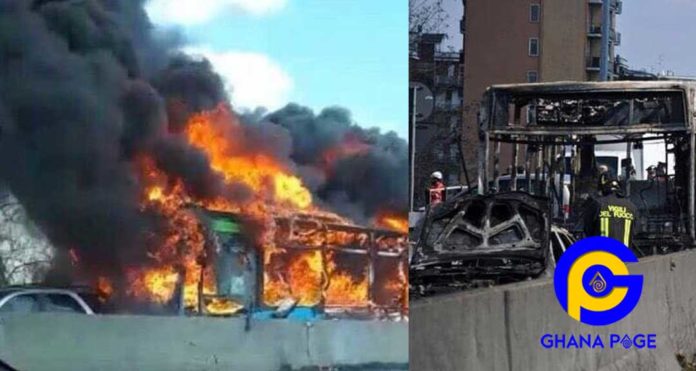 A Senegalese Driver who is upset with how Italy treats immigrants hijacked a school bus with 49 school children and 2 teachers in the city of Milan and set it on fire.

The students and their teachers were being driven from their school in Vailati di Crema to a gym but knowing his intentions, the driver took a different route on a provincial highway towards Milan’s Linate airport.

SEE ALSO: Cleaner finds £300,000 in a London bus and handed it over to the police

Holding a knife, the Senegalese driver told the kids and their teacher that “No-one will survive”. According to him, his actions stem from how Italians treat immigrants and the deaths on the Mediterranean Sea.

According to the Milan Police, as the driver was speaking to his victims, a boy secretly called his mother on a mobile phone who also alerted the police.

By the time the police intercepted the bus, he had sprinkled patrol around the bus and set it on fire. But the police was able to break the windows and rescued all the victims out before the car burst completely into flame. The Senegalese driver has been taken into custody by the Milan police.