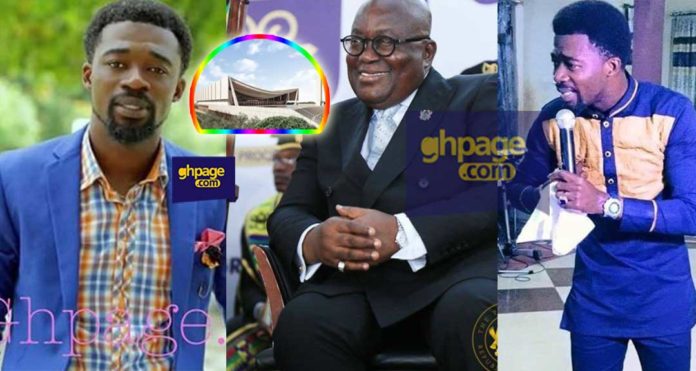 Popular Kumasi based Prophet, Reindolph Oduro Gyebi better known as Eagle Prophet has added his voice to the ongoing debate about the construction of the National Cathedral in Ghana. He claims to have a message from God to Ghanaians.

“The location the Lord has directed for the establishment of the cathedral should not be left the way it is, no one should fight it, everybody should leave it and I am saying this as the prophet of God, that anyone who dares fight the National Cathedral will be fighting their entire generation. They should keep quiet for God to take control of this country”,

Explaining his position, Prophet Reindolph Oduro Gyebi revealed Dr. Kwame Nkrumah, the first president of Ghana gave dark powers and occults control over the nation and that is why Ghana is not developing. He stated that building the National Cathedral will be a major step in solving the problems of the country.

“If we lift Ghana up in prayer in that building, against all evil and negative forces that have held the country back all these years, you will witness what will happen. I will say this once and again, the first President of Ghana initiated this country under the forces of darkness… He established Ghana in a very high demonic way and any prophet of God knows what I am talking about.

“It is said that the one who heads a family determines the blessings and curses of the people. That is what the father of the land Dr. Kwame Nkrumah did with Ghana and now so many things are going wrong but I thank God for President Akufo- Addo. God will guide him to build the National Cathedral and all altars of the devil will break… I talk as the prophet of God.” he said.

WATCH AND LISTEN TO EAGLE PROPHET BELOW