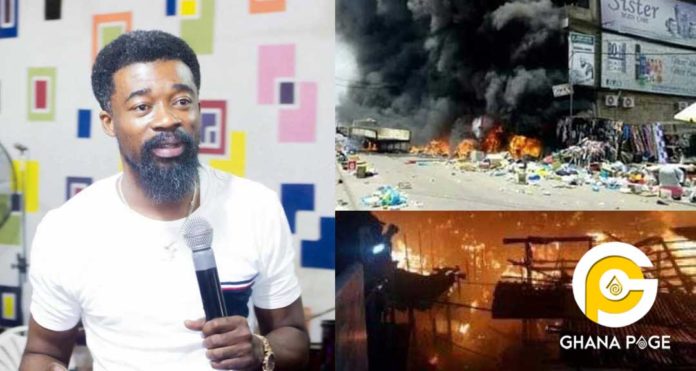 It has been discovered that Prophet Reindolph Oduro Gyebi best known as Eagle Prophet, the founder, and leader of God’s Crown Chapel based in Kumasi prophesied the Good Friday’s Kumasi Central Market fire outbreak 2 months ago in the studio of Nhyira FM.

Speaking at the studio, Eagle Prophet stated that God has shown him women at the Central market weeping over their lost properties due to fire outbreak.

To prevent that, Eagle Prophet stated live on air that every woman who owns a shop at the Central Markets should always pour salt in water and sprinkle the water in front of their shops each morning before the sweep their shop.

Eagle Prophet revealed this will save their shops even if by some failure the fire outbreak occurs. He encouraged them to do it in order to save their millions of cedis of investments.

SEE ALSO: Footage of when the police came for Junior US’ dead body drew tears from his friends who were gathered at his house [Watch]

Yesterday night Friday 19th, 2019, there was a wildfire outbreak which raged some parts of the Kumasi Central market. It took the fire service personnel hours and a huge number of officers to put the fire off.

SEE ALSO: Details of how prostitutes invited by Junior US to his house led shooters to murder him revealed [SEE]

Specifically, shops at the Dr. Mensah enclave of the Kumasi Central Market were burnt to ashes. Shop owners watched on helplessly as their properties were ravaged by the fire.

This is the second time fire has destroyed that section of Kumasi Central Market where second-hand clothes are mostly sold.