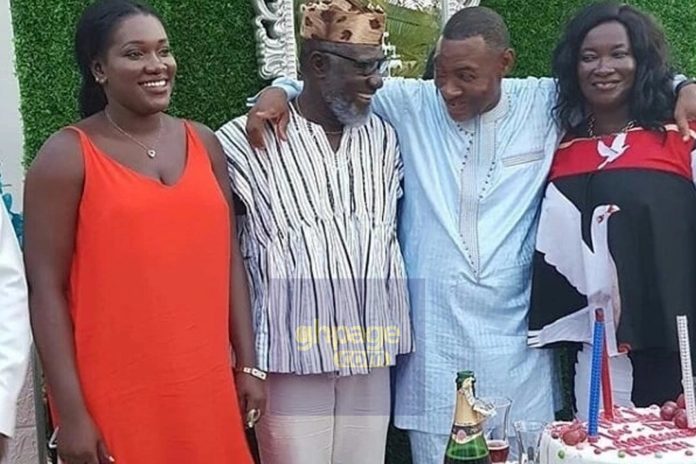 Its been three months since the passing away of Dancehall sensation Priscilla Opoku Kwarteng popularly known as Ebony Reigns.

After her burial, Ghanaians and her fans have heard less news about her parents especially her mum. Until Mother’s day when a picture of her with Ebony’s senior sister Foriwaa Opoku Kwarteng surfaced making people wonder if he has overcome the sudden demise of her daughter.

Last Tuesday, May 15 was the birthday of Dr. Lawrence Tetteh, the Founder and President of the Worldwide Miracle Outreach International and as part of activities to mark Rev. Dr. Tetteh’s birthday, a party was held in his honour.

Among the dignitaries present were the family of the Dancehall musician, Ebony Reigns. Ebony’s father, Nana Opoku Kwarteng, her mother, Beatrice Oppong and big sister, Foriwaa joined many others to celebrate with the renowned international evangelist.

In a photo sighted by Ghpage.com, Ebony’s family are seen smiling while they posed with Rev. Dr. Tetteh for the picture. The celebrant stood between Ebony’s parents and wrapped his hands around them with Foriwaa standing to their right. It is one of the very few moments the family of Ebony has been seen happy since the singer died.

And social media users took note of the development as the photo emerged online.

For @adwoadenkyembour it was normal because “Life goes on”

@cherriecoco_1 sounded happy seeing that “They smile once again.”

Rev. Dr Tetteh is known to have been close to Ebony in the last days of her life on earth.

In fact, Ebony, on February 6, just two days to the tragic accident that took her life, posted a photo of herself and Rev. Dr Tetteh on Instagram.

Rev. Dr. Tetteh revealed later that their meeting was about Ebony wanting to repent and that he had led her to say the sinners’ prayer during their meeting.

Based on his relationship with Ebony, Rev. Dr. Tetteh volunteered to foot some of the bills for Ebony’s funeral including paying for her casket.

He has since become a friend of the family and it was only proper that they attended his birthday party to wish him well.