Ebony’s father lash out at Bullet over GHC 2000, Bullet reacts 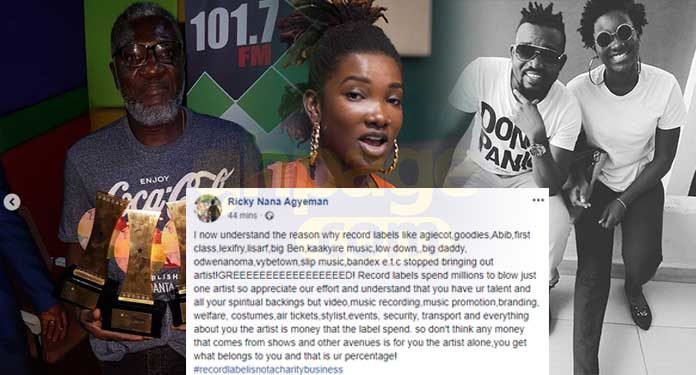 CEO of Rufftown Records, Ricky Nana Agyemang, popularly known as Bullet has spoken after allegations made against him by the late Ebony’s father that he cheated on him concerning the concert held in memory of his daughter.

Father of the late Ebony Reigns, Mr Opoku Kwarteng in an interview on Accra-based Adom FM on Saturday disclosed that Bullet after the show organized in the memory of the late Ebony gave him only GHC 2000 out of a total of GHC 39,999.

According to Ebony’s father, he was cheated by Bullet and that Bullet didn’t disclose the financial outcome of the concert to him.

In an interview with Mike Two on Adom FM last Saturday, Mr Opoku Kwarteng hinted that he called on Bullet to render accounts after his crosscheck from Kasapreko indicated they gave Bullet Ghc90,000(Nine Hundred Million) for the concert and funeral.

He added that he was surprised when Bullet showed him a photocopy of a cheque of GHc 39,000 as profits made from the concert and proceeded by saying that he was given just GH 2000 out of the GH 39,999 he(Bullet) got.

Ebony’s father indicated that he has made money in life and that all he wanted from Bullet and the crew from Ruff Town Records was the truth which they failed to deliver.

But a post on Bullet’s Facebook timeline some minutes ago, the CEO of Ruffown Records made it known that all the allegations made by Nana Opoku Kwarteng are such that he;’s ignorant of what entails in the upbringing of an artist.

According to Bullet, much money is pumped into costume, transport, music video, air tickets, music promotion, branding, stylist, events, security, transport and welfare so it would be fair if he[Ebony’s father] would just appreciate his share of the money and stop the unnecessary rants.

read more: Ebony’s Father Has Shutdown Critics On His Daughter’s Life-Check Out His Comments

“I now understand the reason why record labels like agiecot,goodies,Abib,first class,lexifry,lisarf,big Ben,kaakyire music,low down,,big daddy, odwenanoma,vybetown,slip music,bandex e.t.c stopped bringing out artist!GREEEEEEEEEEEEEEEEED! Record labels spend millions to blow just one artist so appreciate our effort and understand that you have ur talent and all your spiritual backings but video,music recording,music promotion,branding, welfare, costumes,air tickets,stylist,events, security, transport and everything about you the artist is money that the label spend. so don’t think any money that comes from shows and other avenues is for you the artist alone,charitybusiness
#youcantbringrufftoyou get what belongs to you and that is ur percentage!
#recordlabelisnotawnrecordsdown
#Godwillbethejudge
#longliverufftownrecords” his post read.