Video: I will marry my husband again – Ebony’s mum promises to solve issues with ex-husband 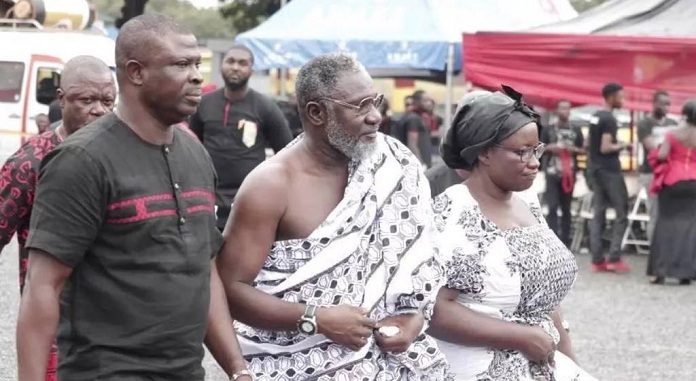 At long last, Ebony Reigns born Priscilla Opoku Kwarteng has been put to rest in a befitting manner this weekend. The funeral service was held at the Forecourt of the state house and she was buried at the Osu Cemetary.

Thousands of Ghanaians including politicians, entertainers, fans and family throng the funeral grounds to pay their last respect to the late 21-year-old queen of Dancehall, Ebony Reigns.

In a radio interview with DJ KA on Kumasi-based Silver FM, the mother of the late singer, Beatrice Oppong expressed her gratitude to all well wishers who came there to commiserate with the family.

He also thanked all the companies and individuals who supported them during the funeral service in kind and in cash.

“The love shown to the late Ebony and the family is beyond measure. We never thought Ghanaians love her like that. All that I can say is that may God replenish whatever sympathizers have lost in the mourning of Ebony”, Ebony’s mum said.

SEE ALSO: Video: Watch when Mzbel and other Ghanaian Celebrities paid their last respect to Ebony

When news went viral that Ebony has died, it was the first time most Ghanaians heard of Ebony’s mother and even got to know her parents are divorced.

But throughout this mourning period, there is no doubt that the loved the two elderly parents shared is still there. The spark between Madam Beatrice and Nana Opoku Kwarteng is not all lost.

Many have been wondering if the demise of their daughter can bring them together and DJ KA took the opportunity to ask Madam Beatrice if they will get back together again.

SEE ALSO: Video: The Heartbreaking Moment When Ebony’s Parents Paid Their Last Respect To Their Daughter

More importantly, when the host probed if she’s willing to reunite with her husband, Madam Beatrice responded in affirmative. The host, DJ KA asked the million dollar question and Ebony’s mum answered Yes!!.

“I was delighted to see you walking with Mr. Opoku Kwarteng at the funeral and it was lovely. So, can you promise that you’ll marry him again?”, DJ KA asked. Madam Beatrice Oppong smilingly responded YES!.

LISTEN TO THE INTERVIEW BELOW

SEE ALSO: This Video Of Ebony’s Mum Singing ‘Maame Hwe’ At Her Daughter’s Funeral Will Make You Sad