Edem tackles Kwame A Plus, lashes out at him for disrespecting Feli Nuna 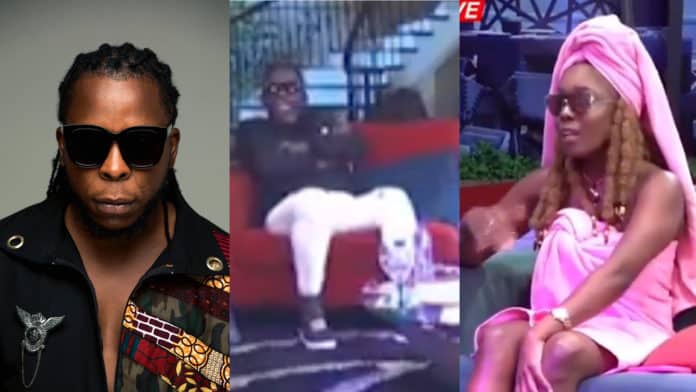 Rapper Edem has come to the rescue of the singer Feli Nuna, who was dragged by Kwame A Plus on UTV over a discussion on relationships and marriage.

On the United Showbiz show on Saturday night, Feli Nuna was confronted by Kwame A Plus when she shared her opinion on the role a man needs to play in her life.

Feli Nuna was asked if her boyfriend invests in her profession during the deliberation, and she replied in the negative.

Feli’s announcement about her significant other was met with opposition from A Plus in particular.

“Your boyfriend is wealthy, but he does not work in the entertainment industry.” On Saturday, he questioned, “So you’re going to hunt for someone to invest while your partner hides his?”

“You have a wealthy partner who refuses to put money into your music.” You went to someone else for money and the individual said he likes you, which made you angry. Let me tell you what doesn’t make sense: your boyfriend’s relocation. He described him as a “f*#king child.”

This sparked yet another commotion among the panellists, prompting the moderator Nicki Samonas to appeal for calm.

On the back of that, Edem has described the entire session as disrespectful to the Feli Nuna. According to him, a man who thinks the way Kwame A Plus does should not be tolerated.

Edem asserted that Kwame A Plus is a threat to the girl-child if that’s how he thinks.

In a series of tweets, Edem communicated his displeasure by writing:

Felly Nuna was purely disrespected on that Panel..Nobody should take that bullshit all in the name of promotion…

Those saying her boyfriend should fund her..Their girlfriends and Wives are working for other people to make money..Smh..Why aren’t you building companies for them ..Y’all are even sitting on a panel to get paid and you are saying that..Why u no build ur own stations.

Imagine your daughter working in a company that has men who think like this for a woman ..Smh..Unacceptable