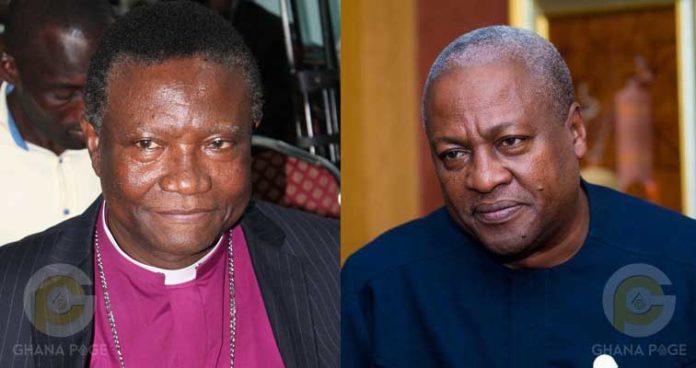 The Chairman of the National Peace Council, Rev. Prof. Emmanuel Asante has called on former President John Dramani Mahama to apologise to the nation for saying the opposition National Democratic Congress (NDC) will match the governing New Patriotic Party boot-for-boot with violence in the 2020 polls.

While addressing NDC delegates in the Adaklu Constituency of the Volta Region on Thursday, 31 January 2019, the former President of the Republic of Ghana, John Dramani Mahama sent a word of caution to the ruling New Patriotic Party (NPP) that they would not remain silent if they decide to be violent in the coming 2020 elections.

According to the former President, the National Democratic Congress (NDC) has a revolutionary background and can also be more violent if they choose to be.

This statement by the former President came after armed gunmen stormed the polling station disrupting the by-election in the Ayawaso West Wuogon constituency which took place in Accra yesterday, Thursday 31st January 2019.

In Mahama’s words: “We are not going to joke in 2020, and I’m sounding a warning to the NPP – we are going to match them boot for boot…”

“I want to sound a caution that NDC has a revolutionary root and when it comes to unleashing violence, no one can beat us to that. It is just that we are mindful of this country’s democracy and that is why we must be the first to respect it. That is why we are acting as a party that is docile and respecting the rule of law. But if we believe that the government cannot protect our people and we believe that the government is using its vigilante groups and illegal forces to intimidate and harass and injure our people, then we may have to advise ourselves.”

Reacting to Mr Mahama’s warning to the NPP, Rev. Asante, in an interview with Accra based Class FM on Friday, 1 February 2019,said the former president ought to be circumspect in his speech.

Rev. Asante said: “If President John Mahama did say what he said, then it is very unfortunate because he has been a head of state, he has been the president of the nation, he is vying for his party to make him the presidential candidate, and if the people of Ghana want him again, he could become the president of this nation. And if it is going to be ‘boot-for-boot’ for the nation to be on fire, then there is no mercy for anybody. And I think it is unfortunate that in anger, such things should be said.”

Read also: Kuami Eugene’s mum gives him a big surprise on his birthday

“I pray and I want to believe that he didn’t mean it, he did it out of anger. We have to be very circumspect and under such circumstances watch the things that we say.”

“If he said that, I would want to say that President Mahama, with all humility, I will plead with him to apologise to the nation. In making that statement, he has really created fear in the hearts of people and it’s not just President Mahama I will say this to, I want to say this to all our leaders, people we are looking up to in this nation; that under such circumstances one would expect that they will be the voice of wisdom, a voice that will calm tension, a voice that will help Ghanaians to be able to say: Indeed, we have leaders. So, please let’s be very careful about these things that we say”.

Touching on the silence of President Nana Addo Dankwa Akufo-Addo 24 hours after the shooting incident, Rev Asante said: “Sometimes, it is important for us to learn native wisdom. The Akans say one who is a leader does not simply jump into situations. When matters happen, you’ll assess the situation, you get all the information before you talk. The thing happened yesterday, it is too early for people to say the president has kept silent on this matter. It is not for me to defend or speak for anybody.”