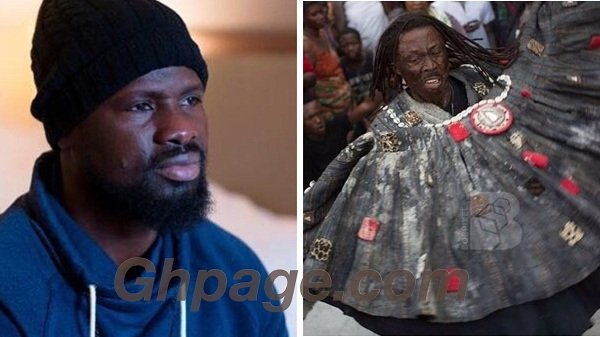 The former Arsenal and Galatasaray star Emmanuel Eboue revealed in December 2017 how he has lost all his fortune accumulated as football star to his ex-wife during the divorce settlement.

He revealed how the court awarded all his properties to his ex-wife including all his cars and mansions in London. According to him, his wife Aurelie handled his finances, adding that “whatever she tells him to sign, he signs”.

The rich Ivorian footballer has been reduced from riches to rags and he sometimes sleeps on the floor in a friend’s house and he uses London’s public transport. He even revealed he was contemplating suicide.

But there is good news, Galatasaray football club has rescued the former soccer star by employing him as a coach at their junior team with a sizable salary.

Popular Ghanaian fetish priest, Kwaku Bonsam has waded into the ongoing financial and marital problems of Emmanuel Eboue and has revealed the cause of the Ivorians downfall.

According to the controversial fetish priest, an Ivorian ex-girlfriend of the player cursed him after he broke up with her for no reason after becoming a star. Speaking to Kasapa Sports, Kwaku Bonsam said:

SEE ALSO: “Akufo-Addo should be serious about the KUMACA deaths or else…” – Kwaku Bonsam warns

“Emmanuel Eboue is cursed by his ex-girlfriend and let me tell you that Eboue’s woes and downs in his life is as a result of the curse by his Ivorian ex-girlfriend whom he promised to marry but disappointed and dumped her so painfully.”

“In fact, the girl did so much for Eboue but it was unfortunate Eboue caused so much emotional pain to her and ended the relationship without any tangible reason.”

“Eboue must be quick and render an unqualified apology to his ex-girlfriend or else what he is going through will worsen,” Kwaku Bonsam told he told Kasapa Sports.