for zooming her pictures to see her hip pads (Video) 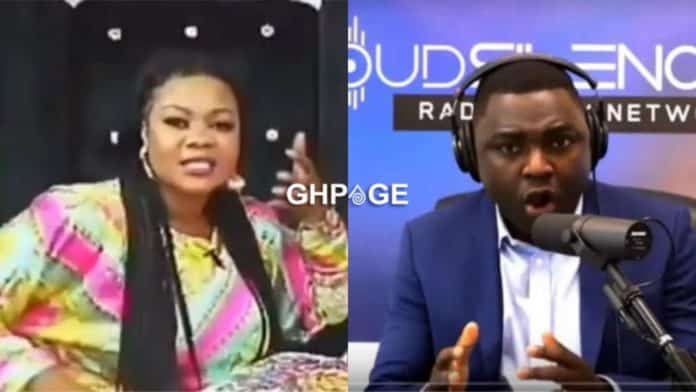 The ongoing hostile beef between Kevin Taylor and Ghanaian gospel diva, Empress Gifty is not ending anytime soon following the political critic’s first attack on her.

Over the weekends, Kevin Taylor used his “WITH ALL DUE RESPECT” platform to tear Empress Gufty into pieces following her surprising appointment as an Anti-terrorism ambassador.

Kevin Taylor also blasted Hopeson Adorye (NPP bigwig and Empress Gifty’s husband) for lobbying for his wife to get such a position although he knows she’s not fit for such.

The US-based journalist also accused Empress Gifty of wearing hip pads just to appear nice in the clothes she wears after expressing his complete disappointment in her.

Well, Empress Gifty has come across Kevin Taylor’s insults and has replied him in a double fold.

According to Empress Gifty, Kevin Taylor is such a fool to waste his precious time on zooming in the pictures of women just to see their nakedness and confirm whether or not they are wearing hip pads.

She defended herself by insisting that hip pads are meant to be worn purposely to boost the confidence of ladies who do not feel and secure good in their natural bodies.

She further fumed that just like it’s not okay to ask people wearing pants or not fools like Kevin Taylor shouldn’t be zooming the pictures of women.