I entered into music because of Drake – Kwesi Arthur 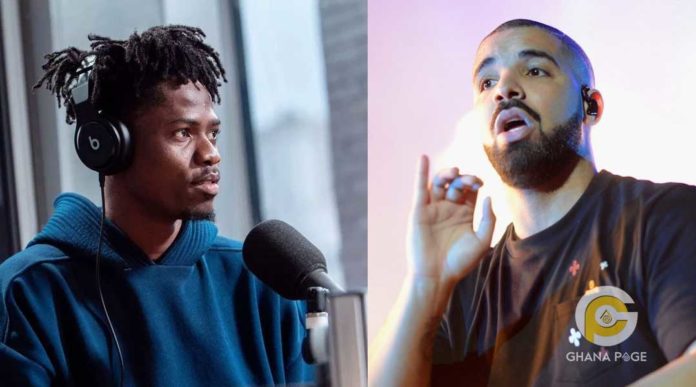 BET nominee and “Grind day” hitmaker Kwesi Arthur has revealed that he had the passion to do music after listening to some songs from OVO boss Drake.

The Tema-based rapper made this known in an interview on Apple’s Beats 1 music radio station hosted by Ibrahim Ebro Darden, a popular American media executive.

According to him, after listening to Drake’s raps he was surprised as to how he made the raps look simple and said to himself that he could also do same and that was where he fell in love with hip-hop started to write raps.

“I’m into music because of Drake,” he said during the interview

He indicated that prior to music, unlike others who were poets and writers, he was never a writer nor a poet.

Kwesi Arthur began to pursue a career in music after listening to Drake’s debut album, Thank Me Later.

In 2015, he released the lead single “Grind Day” from his debut EP, Live from Nkrumah Krom (2017). The record was released under his independent outfit and supported by a social movement called GroundUp Chale. He later released the remix for “Grind Day”, featuring Sarkodie and Medikal.