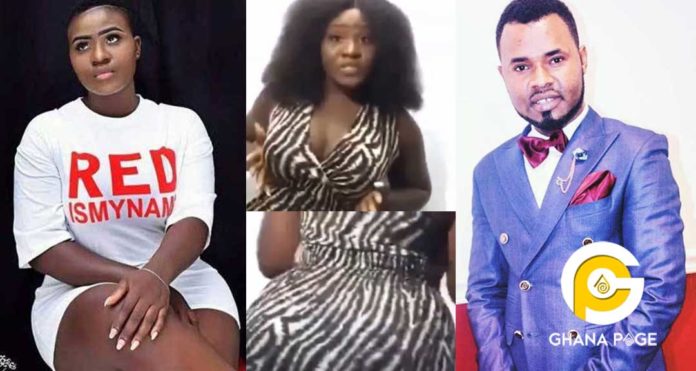 After recording a video to tell Nayas she is an old lady but she is a sweet 20-year-old curvy girl, Mary Waddle, the girlfriend of popular Ghanaian gospel musician, Mary Waddle has become a subject of troll on social media.

According to social media users, Mary Waddle looks like a 37-year-old lady so she should be ashamed flaunting on social media that she is 20 years old.

As some section of Ghanaians on social media are warning her to cease letting people know she is 20 years because it’s ridiculous, others are advising her to quickly hit the gym and do away with some fat.

SEE ALSO: Ernest Opoku is gradually getting mad; his past is hunting him-His girlfriend begs for help [Listen]

It all started when Mary recorded a video just this morning to mock Nayas for being an old lady she won’t fight over Ernest Opoku with her because she is young and beautiful and has plenty men at her disposal.

In the video, Mary gave 360 degrees view of herself whiles shacking her boobs and ass whiles stating that she is just 20 years will all these goods so will never fight over a man.