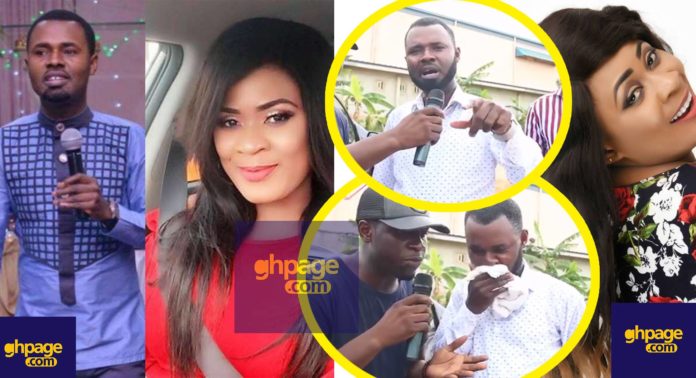 Gladys Mensah Boako popularly known as Nayas the lady who is embroiled in a pregnancy drama with Gospel musician Ernest Opoku did the unthinkable by lashing Ernest Opoku with a cane live on a radio yesterday.

It all started when Nayas revealed that she is pregnant and Ernest Opoku is responsible for the pregnancy. According to her, Ernest Opoku bribed her with 15 pieces of cloth and money to abort the pregnancy but she did not.

Ernest Opoku who felt bitter about the physical abuse which he suffered at the hands of actress Nayas filed a formal complaint against her with the Nima Police yesterday few hours after the incidence.

Ernest Opoku was not the only who filed the report, he was also accompanied by the host of Adom FM’s live worship, Kwamena Idan. He filed the complaint few hours after the incident and the police have started investigations into his complaint and a policeman has already visited the scene where the incident happened to gather evidence.

Meanwhile, the Nima Police have taken the statements of the gospel musician and the presenter and are set to invite the actress for questioning and also take the accounts of witnesses.

READ MORE: Actress Nayas Reveals Why She Had To Cane Ernest Opoku Says He “Milked Her Dry”

According to Nayas, Ernest Opoku to anywhere he goes to perform until he apologises.

“I don’t need anything from Ernest Opoku’s but just his apology but if he says he is not going to do that then I’ll chase him to anywhere he will perform,” she said in a phone in interview with Zionfelix.