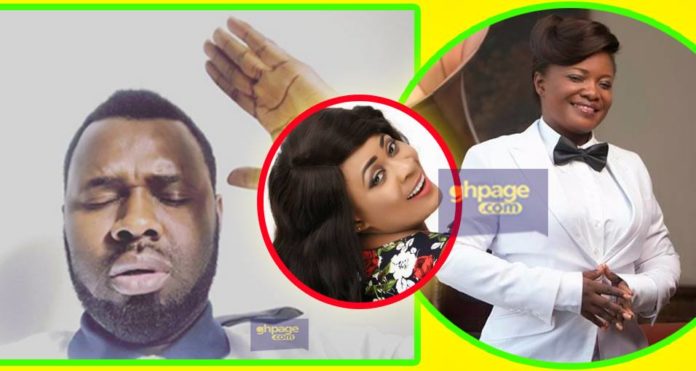 Ghanaian distinguished award-winning gospel musician, Ohemaa Mercy, has said she is not surprised about the problems Ernest Opoku is going through in the hands of Nayas.

According to Ohemaa Mercy, growing up in God, such things are not a surprise to her anymore because it can happen to anyone.

Speaking on Starr Chat and as monitored by GHPAGE.com, she added;

“I believe we cannot condemn them, all we have to do on my part is to rather get close to them and help them because it’s not easy doing the work of God”

She also indicated that gospel musicians go through a lot of temptation—Most especially if you are moving from one level to the other.

Ohemma Mercy’s comment follows after the recent Ernest Opoku – Nayas fiasco in the media. Nayas said, Ernest Opoku has impregnated her and not only that, forced her to abort the three months old pregnancy.

After failing to abort, Ernest Opoku became furious and started cutting her off from his life after all attempt to reach Ernest proved futile.

According to Nayas, she had no choice but to come to the media to state her case. The most recent brouhaha between them happened last Monday afternoon.

The Kumawood actress and producer, Nayas 1 on Monday broke into the studios of Adom FM to lash Ernest Opoku who had been invited for a live worship programme. The actress who was hiding canes in her dress reportedly sneaked into the studios without security guards noticing.

READ ALSO: Ernest Opoku Runs To The Police Station After He Was Whipped By Nayas

The drama according to reports attracted several onlookers to the forecourt of the radio station, disrupting and bringing the live worship programme to an abrupt end. However, some personalities managed to calm the actress down and whisked her away from the scene.