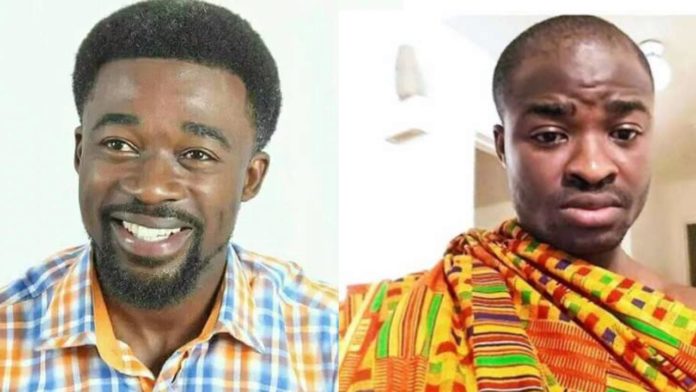 Eagle prophet real name Prophet Reindolph Oduro Gyebi of the God’s Crown Chapel has revealed that in the spiritual realms Evangelist Emmanuel Addai is an agent of darkness.

According to the prophet, the sole aim of Evangelist Addai is to soil the hard earn reputation of popular people in the country to cause people to lose confidence in them.

Prophet Oduro went on to reveal that Evangelist Addai is operating with powerful spirits of darkness which was passed on to him by some great-grandmother of his, adding that in the spiritual realm, The evangelist is a cannibal.

In an interview with Boamah Darko on Hot93.9fm’s ‘Maakye’ program, the prophet alleged that the spirit possesses the notorious facebook Evangelist is advanced therefore Evangelist Addai is half human, half snake.

“That boy is a wizard, the spirit instilled inside him is not a mere spirit but that of powerful evil spirits… Anytime he sits down he is surrounded by dwarfs. He is an agent of the devil whose mission is to destroy individuals who are being used by God to help others. He is like Tobias and Sambalat, the evil inside of him is enormous, he is a demon straight… When he sits down and speak, in the spiritual realm his head is a snake with the length of its tongue reaching his shoulder which is divided into two and when he speaks he lures people who watch him into believing all he says, so all that comes out of his mouth is deception and he has many followers and you know how the devil operates, with deception and lies. That demon inside of him was passed on to him by his great-grandmother which has now developed and when the spirit manifests he acts like a deranged person which causes him to speak against people.”

He further sent a message of caution to the Evangelist to check his utterances or he would face the ultimate punishment.

When asked by the host if the demon in Evangelist Addai could be cast out, he said ” who is going to cast that demon out… This demonic madness who is going to cast it out… That guy over there, he is half snake, half human… When he wakes up and speaks lies against pastors, and prominent individuals and they don’t pay attention to him, that does not mean he can get away with everything because there will come a time where he will be punished for his deeds. Someone who eats and drinks the blood of humans in the spiritual realm, why do we encourage people like him, someone who uses three children as stools he sits on in the spiritual realm… That guy should be arrested, he is lucky he is not in Ghana”

SEE MORE: If it wasn’t my prophecy, Dr. Bawumia would have been a dead man – Eagle Prophet