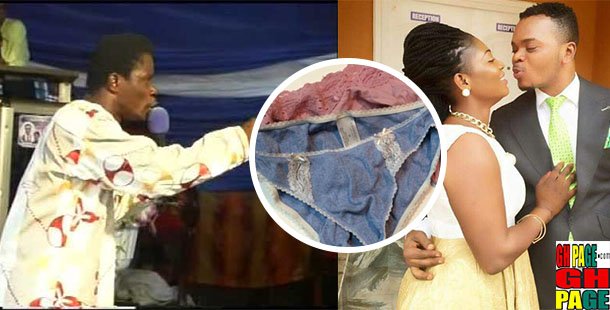 Evangelist Akwasi Awuah is the founder and leader of Pillar of Zion Church International.He is widely known to be one of the most outspoken evangelists in Ghana and he has taken Obinim to the cleaners over his pants and bra prophetic direction.

According to the radio evangelist, Obinim is a complete fool to burn his church member’s pants and bras as he believes it doesn’t conform to Christianity.

The “no-nonsense’ evangelist did not understand why Obinim has refused to preach the gospel of Salvation but has rather resorted to the burning of undies.

The evangelist in his preaching also extended his criticism to other pastors who are equally practicing the awkward thing he believes Obinim is doing.—That is to those, collecting or selling eggs and bras in their churches.

He is, therefore, calling on Obinim and co preach the word of God for people to change their minds to follow Christ and not burn bras and pants as that will not take anyone anywhere.

The evangelist indicated that he does not understand why Christians will be moving from one church to the other collecting water, bangles in search of a miracle.

“Those burning panties and Brassieres, fools is panties part of Christianity?Go and preach to people to repent and you are rather requesting for brassieres.”Evangelist Akwasi Awuah stated.

“Some are also at Ahenema Kokoben(A suburb of Kumasi)selling bras and eggs and someone is also in Accra burning panties—Preach for repentance and you are saying that, where the smoke reaches your enemies can’t reach there, fool ,what can the smoke do?”Evangelist Akwasi Awuah fired