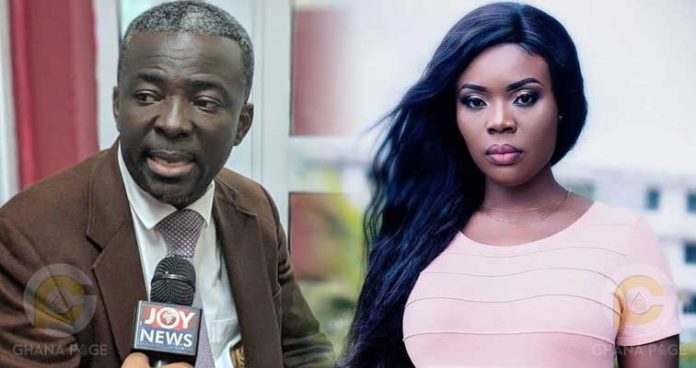 Popular highlife artiste now Evangelist Papa Shee has revealed that television presenter, Deloris Frimpong Manso has refused to air his interview with her on The Delay Show which was filmed several months ago for reasons best known to her.

If there is one person who has endured a lot of negativity it is Deloris Frimpong Manso host of the Delay Show which airs on GHOne TV.

She has seen it all; from criticisms about her shows, public breakups with her friends (Afia Schwarzenegger, Tornado, Vicky Zugah), insults and accusations from guests to other controversies.

In a video obtained by Ghanapage.com, the now evangelist speaking on “Entertainment Ghana” on Neat 100.9 FM, disclosed that Delay interviewed him about four months ago and promised to air it but it has never happened till as she promised it will be aired specifically on December 24, 2018.

According to Papa Shee, he feels Delay has refused to air it because the interview didn’t go in her favour and is of the assertion that if he said something negative that would make her show trend, she would have quickly posted it on social media for views but because he preached the word of God in the interview, Delay has deliberately refused to air the interview for her personal interest.

Read also: Delay reveals she would contest for President in 2032 elections

He has, therefore, challenged Delay to air the interview as she promised.

Read also: Never in my life will I be on the Delay Show – Mark Okraku Mantey

A lot of celebrities have appeared on the Delay Show and has made the show very popular over the years but a lot of her interviewees have one way or the other complained about twisting and using their own words against them, maybe this might be one of them.

Share
Facebook
Twitter
WhatsApp
Previous articleAnokye Supremo’s girlfriend killed him and not Daddy Lumba – source
Next articleI had all my 6 kids with my ex-boyfriend; my hubby does not know-Woman