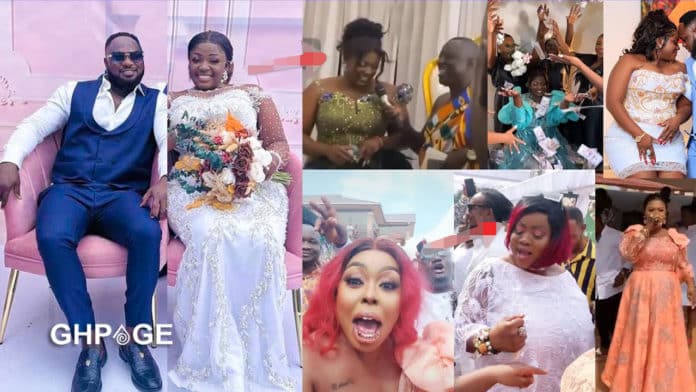 The moment we’ve all been waiting for is finally here! – Actress Tracey Boakye has tied the knot with her longtime boyfriend Frank Badu Ntiamoah.

The mother-of-two sent social media into a frenzy after rumours about her wedding slated for Thursday, July 28 initially started making the rounds.

The reports were met with mixed reactions from fans and followers of the actress as many thought she was only messing with their heads. But we have all been proven wrong.

Tracey and Frank are officially the new couple in town as their traditional marriage and white wedding ceremony have taken place as planned.

The colourful event which was strictly by invitation came off at an undisclosed location in Kumasi and saw a lineup of family relatives and celebrity friends in glorious attendance.

Watch the first exclusive videos from the nuptials below

Ghanaian comedienne Afia Schwarzenegger was in full action as she storm the wedding to shame naysayers who thought she would betray her best friend.

She finally clashed with actress Mercy Asiedu after throwing subtle jabs at the Kumawood star and her team over what she termed as ‘improper dressing’ to Dubai.

As earlier reported, Obaa Christy who was listed among some big artistes to perform at the wedding did not disappoint.