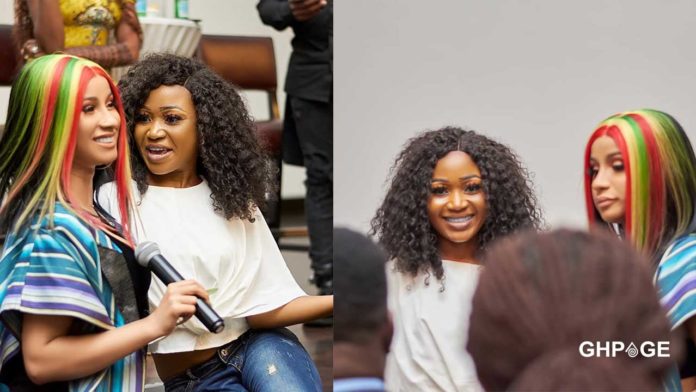 Actress and video vixen Rosemond Alade Brown popularly known as Akuapem Poloo after waiting for hours finally got the chance to meet American rapper Cardi B who was in Ghana for a concert.

Prior to meeting Cardi B, Akuapem Poloo alongside other celebrities like Afia Schwarzenegger, Hajia4real, Wendy Shay and others took to social media to express how disappointed they were after waiting for Cardi B who was by the poolside chewing khebab.

This made most of the celebrities who had gathered to meet and greet Cardi B as promised by the organizers leave the Kempinski Hotel where Cardi B was lodging ahead of her concert that evening.

Akuapem Poloo didn’t join the others as she stayed in and waited till she got the chance to finally meet and greet her favorite rapper.

In an interview with Halifax Ansah-Addo on Okay FM’s ‘Best Entertainment Show’ on Monday morning, Rosemond Brown was asked why she had to stay at the hotel for over seven(7) hours just to meet and greet Cardi B.

She disclosed that the wait was worth it as she is a huge fan of Cardi B and could have collapsed and died on the spot if she failed to catch a glimpse of her.

”Halifax, I love Cardi B. I was so ready for her, I had wanted to see her so there was no way I would have given up on seeing her face to face. I would have collapsed and died if had not seen Cardi.” she stated in the interview