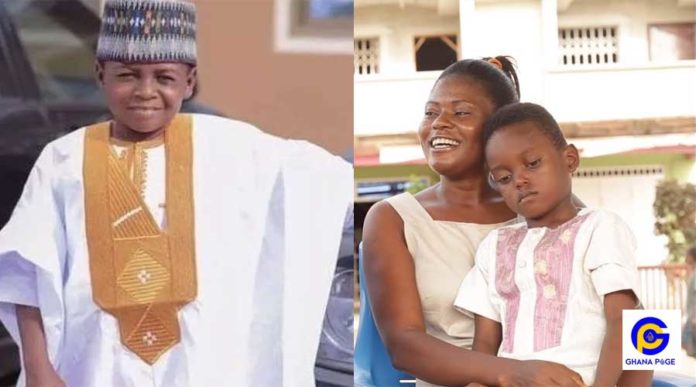 The alleged baby mama of popular diminutive actor Yaw Dabo has finally detailed in an interview her relationship with the actor.

According to the lady identified as Akua Adom, she has never met the popular actor in her life and there is no amorous relationship going on between them.

ALSO READ: I don’t know them -Yaw Dabo reacts to the alleged baby mama who described him as a deadbeat dad

The lady who claimed she has a five-year-old son with the comic actor disclosed that she is an actress and the video that went viral was just a ‘trailer’ for a movie dubbed ‘Dabo in Trouble’.

According to Akua Adom, she wasn’t referring to Yaw Dabo the popular Kumawood actor but a character in the movie who bears the same name.

“It wasn’t my intention to cause fear and panic and also tarnish the image of Yaw Dabo.

It was just a movie and I didn’t know it was going to negatively affect his brand. It was a character in the movie and not directed to the real Yaw Dabo”, she added.

ALSO READ: Yaw Dabo and baby mama issues was hype for a movie

The mother of one also rendered an unqualified apology to the diminutive actor for damaging his reputation and also to Ghanaians who were affected by the viral video.

On 14th April, a video of a lady claiming to the baby mama of kumawood actor Yaw Dabo surfaced.

The lady alleged that she has a five-year-old son with the actor and has refused to take up his responsibilities as the father.

However, Yaw Dabo reacting to the viral video disclosed that he has never met the said lady in his life and was never in a relationship with her.