“You’re a liar” – Man calls out Fameye, accuses him of stealing his iPhone and nearly hitting him with his car 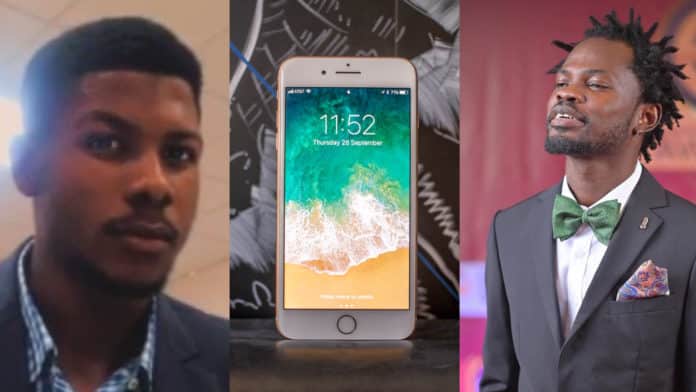 Ghanaian singer Fameye has been called out by a gentleman that he allegedly seized his phone after almost hitting him with his car.

The “Mati” hitmaker had earlier shared a post where he was encouraging Ghanaians to help him find the gentleman and deliver an iPhone to him.

Per his account, the man accosted him and started filming him after his team had a problem in traffic. To be on the safer side, Fameye said he decided to seize his phone which he was using to record him.

Fameye in his account admitted to doing reckless driving which nearly resulted in a fatal accident on the Okponglo stretch. He admitted to seizing the phone which has been in his custody for some time now.

Fameye suggested that he was looking for a way to find the gentleman in order to deliver the phone to him.

Well, the gentleman has come out to debunk Fameye’s account. According to him, Femeye showed no remorse after he nearly killed him. According to the gentleman, he was attacked and his phone was seized when he decided to film the artist for evidence.

He accused Femeye of stealing the iPhone he had and also said he reported the case to the police.

Fameye has told you all his story its now time for me to tell mine. Lying to the whole world it was last year when everything happened on sunday 9th january at okponglo around 5pm

the driver of the camry started switching lanes running away after what he did, my first though was that was a legon student driving cos reckless was is understatement that was suicide driving… the camry was stopped by the traffic and me ,my friend @NanaAppiah100 and the driver

rushed to the camry to confront the driver for the foolishness ,driver went and saw it was fameye …Fameye claims he apologized?? HE IS A BLOODY LIAR HE WAS SMILING IN THE FRONTSEAT NONCHALANT

That really annoyed me cos you try and kill me and you say nothing about that??His team in the car said nothing to all waiting from green light to drive off.. i took my phone and began filming for evidence because i cant get away like that..his boys dropped and attacked me,hit me

they hit my friend and tried to steal his phone to though he wasnt recording .. Fameye himself then got out of the front seat attacking the driver asking him NA CAR BEN NA WOTWI

He and his team drove off after and we filed a police case immediately at the Legon police station. He stole my iphone 8, yh it means nothing to you but it meant the world to me and you took it…it happened on the 9th of january,2022…  sunday 5 pm at the okponglo traffic stop.