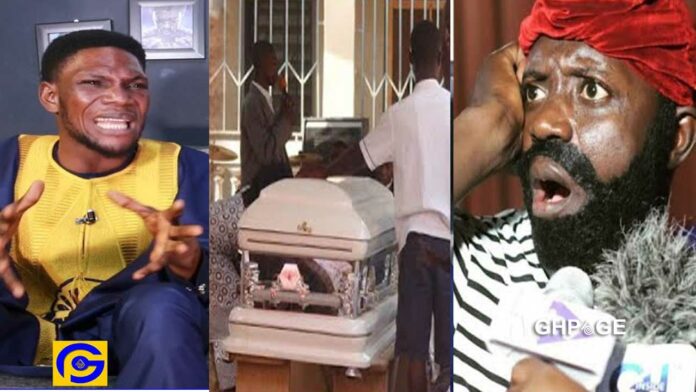 The aftermath of the sudden death of Baba Spirit real name Francis Yaw Ofori comes a series of conversations from fans, followers, industry players and now even men of God.

The popular comedian passed on barely a week ago after being sick for some time.

Following his death, there are rumours going around that he was allegedly killed by one of the people in the industry.

His uncle who has also granted an interview also stated that the late Baba Spirit was killed with black magic popularly known as juju.

This and more have come up regarding what killed the one-time popular and favourite comedian. Prior to his funeral, Prophet Jeremiah has come out with a profound revelation.

Speaking with Abena Gold on GhPage TV, the Prophet shockingly disclosed that the day Baba Spirit will be buried, a family member will die.

Prophet Jeremiah confirmed that Baba Spirit was killed with juju from a close colleague at his workplace.

He explained the late comedian’s killer did not only use Baba Spirit but used one of his family members as a thanksgiving sacrifice after his death.

The Prophet advised that the Family of the deceased should go and consult an Oracle before doom befalls them once again.

The family of the late comedian Baba Spirit real name Francis Yaw Ofori have announced that his one-week observation would come off on September 24.

In a poster released by the family and sighted by Ghpage.com, the celebration is to come off at the Arts Centre.