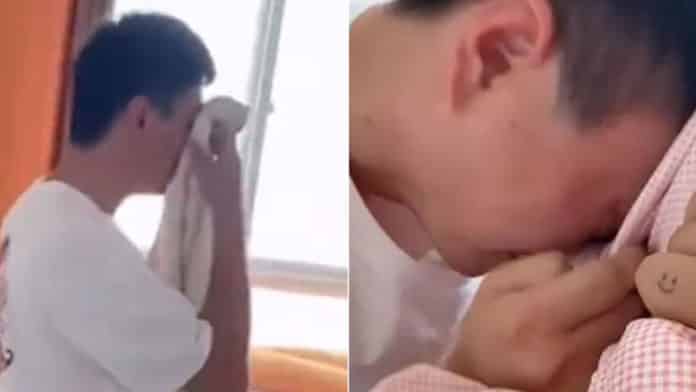 A Chinese father has gone viral following a heartbreaking but hilarious video of him crying after his son, who he tutored daily for one year, scored six out of 100 marks in his final math exam.

Reports say the child’s parents who live in Zhengzhou, Henan, received his exam report card on June 23. Upon learning about their son’s abysmal performance, the father broke down in tears.

He can be seen crying in a bedroom and wiping away his tears in the video posted to Weibo by Chinese media Qilu Evening News, while his wife can be heard laughing in the background.

It was revealed that the man had been staying up late at night to give his son math tuition every day for the past year.

In the video shot by the boy’s mother, the father said: “I don’t care anymore, my efforts are wasted, let him struggle by himself!”

The father’s disappointment stemmed from his son’s inconsistent results that range from 40 to 50 marks to 80 to 90 marks sometimes in previous examinations, according to his mother.

But after the year-long tuition administered personally by the father, the son scored six out of 100 — a massive blow to the son and the father.

Many netizens are sympathizing with the father’s parenting struggles and the pressures of modern education after the video surfaced.

However, others argued that the child’s score was a reflection of the father’s inability to teach math.

Some viewers also suggested that the father’s late-night tutoring may have affected his son’s ability to pay attention at school.