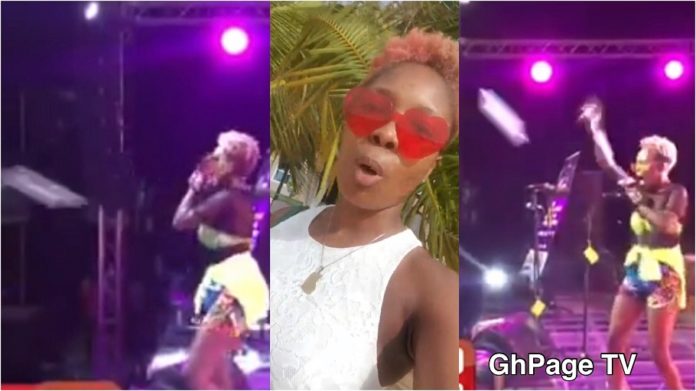 Ghanaian singer Feli Nuna has reacted to the embarrassing moment she encountered during her stage performance at the Ebony Reigns Memorial Concert.

The ‘Love Me Now’ hitmaker condemned the horrible act and added that this is not going to deter her from entertaining her fans and achieving her goals.

“I am very ok and I am just living my life. I am not going to let anybody deter me from achieving my goals because they are huge.

What happened wasn’t cool to me as an artist, as a woman very horrible. This whole SM-BHIM beef, please don’t bring that on us. The same thing was done to Sista Afia at the BHIM concert and it was very horrible.

If you guys are beefing amongst each other, don’t bring it to us the artists. We are just doing our jobs to entertain and give good vibes.

To the sponsors and organisers of the show, it’s very unfortunate I haven’t received any official statement or apology from you. We had a call a day after from a rep at RuffTown records to apologise but I don’t feel that was enough”, Feli Nuna stated.

Feli Numa abruptly ended her performance at the Ebony Reigns Memorial Concert after some Shatta fans threw sachet water at her on the stage.

Prior to her performance, Feli Nuna hailed praises at Stonebwoy which obviously infuriated some Shatta fans present and started throwing sachets water at her.

She was able to swerve the first one while performing her hit single ‘Love Me Now’ which features Stonebwoy but had to walk off the stage when the second one hit her.

This unfortunate incident also happened to highlife musician Sista Afia at the BHIM Concert. Some fans threw sachet water at her for performing her hit song ‘Jeje’ which features Shatta Wale.