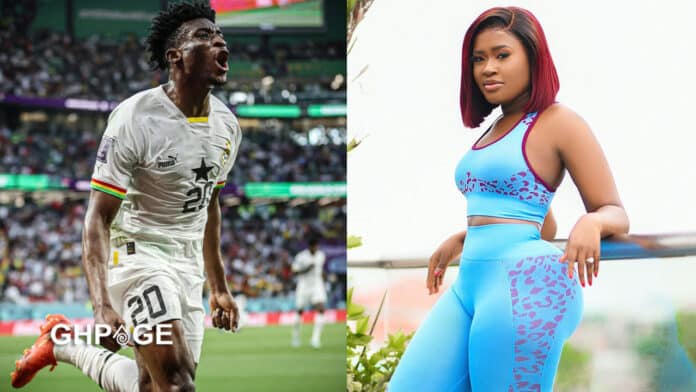 Actress Fella Makafui has been accused of trying to hold Ghana’s poster boy Mohammed Kudus spellbound and have him fall in love with her.

The young footballer who plays as a midfielder for Ajax and the Ghana national team has won him admiration of many football fans following his stellar performance at the World Cup.

After scoring 2 goals in Ghana’s crunch game against South Korea, Kudus has become the talk of the town and the loverboy of many women who have flooded his DMs with messages.

According to a whistle-blower, Fella Makafui is also bent on winning Kudu’s heart by any means possible, even if it means jinxing him.

The mother-of-one and wife of musician Medikal is accused of downloading Kudus’ photos on her phone, which she intends to use for bewitch him.

Since the news was published by some tabloids, the YOLO actress has reacted to what she thinks is a laughable allegation.

She dismissed the accusations with a hearty response to a Snapchat follower who had also indicated that the claims had received widespread attention in the media and being discussed on TV.

“Wahala for who no do  juju,” she reacted with laughing emojis.

Irrespective of how Fella Makafui feels about Mohammed Kudus, some of her fans believe she cannot go far with her admiration for the player.