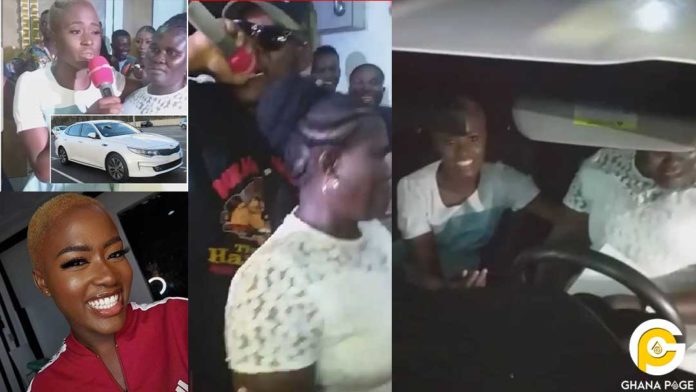 YOLO actress and entrepreneur, Fella Makafui, has wowed social media yet again after buying a brand new ‘KIA Optima car’ for her mother.

The young actress in a video splashed on social media and as monitored by GHPAGE.com on the same day he gifted the car to her mom also open a new supermarket to add to her long chain of businesses.

READ ALSO: Nana Ama Mcbrown for the first time shows a video of her daughter crying

Fella Makafui was seen appreciating her mother which she was flanked by well-wishers and rapper boyfriend Samuel Frimpong known by his stage name as Medikal.

Medikal took the opportunity to perform Stonebwoy hit kpoo k3k3 hit track he featured on as Fella and her mother joyously dance on.

READ ALSO: Showboy shares video of himself before going to prison

As expected, many colleagues such as Prince David Osei, Aaron Adatsi among others, fans and followers were there to support the young entrepreneur on this occasion.

The Ghanaian actress, Fella Makafui, is carving a niche for herself outside acting as she has established her own businesses.

Fella shot to fame after she starred in the youth TV series, ‘YOLO’ and she is leaving no stone unturned.

The ’23-year-old’ is becoming a business magnate as she has her own business.

A wine shop, clothing line, beauty line, delivery service(FM deliveries), Richhills properties among others are some of Fella Makafui’s chain of businesses.