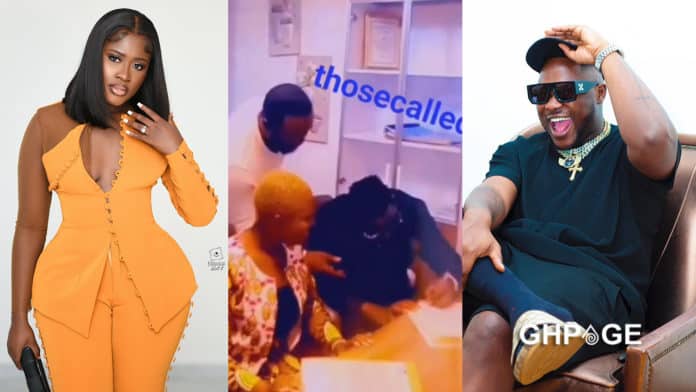 Actress Fella Makafui and musician Medikal have been fingered in another dirty scandal that has exposed their fake lives on social media.

The cover on the celebrity couple was blown after documents and a video of the supposed signing of an ambassadorial deal surfaced online.

According to footnotes surrounding the video, Medikal signed the deal with a skincare company as a brand ambassador on Wednesday, May 25.

Which skincare company in this part of the world would pay such a hefty amount to Medikal to advertise their products? – many Ghanaians are asking.

How much money is the company even going to make to cover the $200,000, not to even talk of making profit?

Well, an insider has come out to reveal that the so-called Skincare company which signed Medikal belongs to his wife Fella and that the whole thing is a ruse.

According to Instagram blog page Thosecalledcelebs, the duo tried to deceive Ghanaians once again into believing that they are the real money-making celebs in the country.

Fella Makafui and Medikal are actually not new to controversies like this. They know the showbiz industry so well that they occasionally pull different stunts to get them the attention they want.