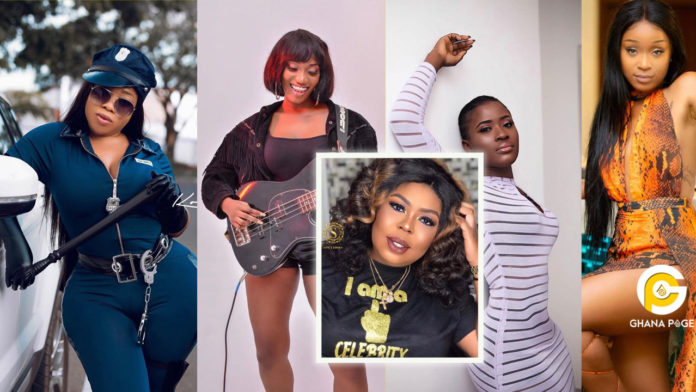 A celebrity is defined as a person who is popular especially in the cycles of entertainment and gets lots of public attention.

Whiles a celebrity should be one celebrated for achieving a feat in a particular field, many people regarded as celebrities in Ghana are just famous for no reason or for flimsy reasons.

Most are famous for either misbehaving on social media, being outspoken and immoral or just for their slaying culture. Some too have made a name for themselves as respectable people in Ghana.

Ghpage.com brings the top 10 female personalities in Ghana who are often called celebrities. The list is in no particular other.

Emelia Brobbey is one of the most famous actresses in Ghana. She made a name for herself starring in hundreds of Kumawood movies.

If Emeilai Brobey is tagged as a “Celebrity” she is and rightfully deserves the term. You can’t take her out of the top 5 best and famous actresses in Ghana.

Efia Odo, born Andrea Owusu is a typical example of a ‘celebrity’ in Ghana. Although Efia Odo prides herself as an actress, she is more famous for her nudity.

Efia Odo since returning to Ghana has been embroiled in more sex scandals than any other celebrity in Ghana in recent times. Although the proper name should be a Slay Queen, Efia Odo is mostly called a celebrity in Ghana.

SEE ALSO: Showboy narrates how he was set up by Criss Waddle to be jailed

Moesha Boduong just like Efia Odo is also called a celebrity in Ghana. But in reality, she is just a famous social media personality who is known for her fake body shape.

But in the typical Ghanaian society, she is also called a celebrity. Well, she is famous on Instagram for her nudity so we will take it like that…lol

Akuapem Poloo whom many people have tagged as a bipolar patient due to her weird behavior on social media ever since she surfaced last year is also called a celebrity in Ghana.

Although she claims to be an actress, Ghanaians know her for her unattractive twerking skills, semi-nude photos, and videos as well as the outrageous statements from her on social media. Well, she is also a celebrity in Ghana.

Wendy Shay is one of the most popular female singers in Ghana presently. She rose to fame after the demise of Ebony Reigns in early 2018.

Signed unto Rufftown Records, Wendy Shay has a number of hit songs. compared to many others who are called celebrities, Wendy Shay is far deserving of the term.

“Serwaa” as she was called in the role she starred in the famous youth series YOLO is a native of Anfoega Akukome in the Volta Region of Ghana.
The Young Curvaceous and endowed lady is an actress and entrepreneur.

Makafui gets social media buzzing always with controversies that surrounds her and one that is still on the trending news list on social media is her relationship with AMG rapper Medikal.

In the true sense of the word, Yvonne Nelson qualifies to be called a celebrity in Ghana. She has made a name for herself as an actress not just in Ghana but all over Africa.

Yvonne Nelson is also a movie producer and an aspiring politician in Ghana. She led the famous “Dumsor Demonstration” which led to the end of erratic power supply in Ghana during the erstwhile John Mahama administration.

SEE ALSO: Shatta Michy hits back at Ibrah One and Shatta Wale for disrespecting her

One of the famous personalities in Ghana who are often called a celebrity in Ghana is Valentina Nana Agyeiwaa aka Afia Schwarzenegger.

Afia Schwarzenegger is mostly called abusive, disrespectful and uncouth by many people in Ghana due to her brazen way of addressing issues.

But hey, in Ghana she is a celebrity. You and I can’t do jack about it so we go take am like dat..lol

SEE ALSO: Female fans fight over Nadia Buari’s handsome brother after she announced he is single

Delores Frimpong Manson aka Delay is a veteran media personality in Ghana. From radio shows to TV interviews Delay has seen it all. She is also a movie producer and a stout businesswoman.

Although Delay is a famous personality in Ghana who is well respected, she is not there yet when it comes to being labeled a Celebrity but this is Ghana and we can’t complain.

SEE ALSO: Kelly B, the Ghanaian rich kid who picked Cardi B with his luxurious cars flaunts more expensive cars

Another personality in Ghana who also deserves the term celebrity is the actress, Nana Ama Mcbrown.

Nana Ama Mcbrown has proven over the years that she is the best actress and most versatile in the creative art industry and there is no doubt about that.

Nana Ama Mcbrown is currently making name for herself as a great interviewer, and advertiser in Ghana. She is the most popular actress in Ghana and deserves the term a celebrity in every sense of the word.

SEE ALSO: Medikal dumped me for Fella Makafui because he was not looking for a woman with sense-Sister Derby spits fire

Above are the top 10 most popular female celebrities in Ghana. We all know most of them do not deserve the tag but what do you think? Share your thoughts with us in the comment section.