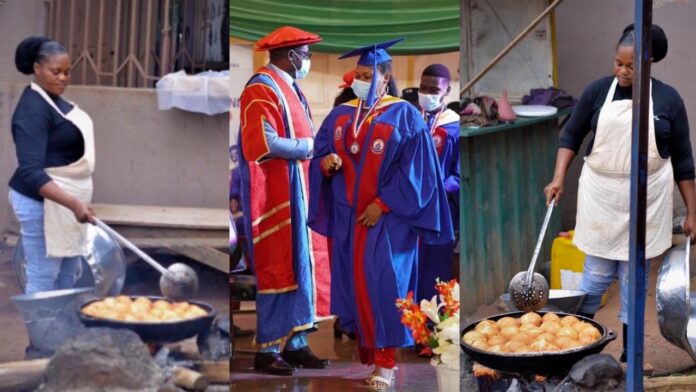 Priscila Akwagu is a Ghanaian graduate who has taken to the selling of “bofrot” (buff load) in order to survive.

After years of unemployment, Priscila was left with no choice other than to return to his village and start a petty trade.

Priscila Akwagu, in an exclusive JOY FM report, said although she graduated with a first-class degree, she has struggled to get a job after national service — the reason she has been reduced to a roadside seller.

Priscilla said she had no option but to rely on her entrepreneurial skills as a mother of one who was inundated with responsibilities.

“I completed JHS in 2007. I got pregnant with my first daughter after school. I was 17 years at the time. So after I delivered, I needed to take care of her. So in 2012, when she was three.”

“I decided to go back to school. I didn’t know what school to attend because I had a child.”

“So, I went to Atebubu and spoke to a man who led me to the headmistress for admission. She was reluctant because girls like me always ended up getting pregnant again.”

“But later, she agreed and admitted me into the school. I just didn’t know how to plan for school and work.”

“I lived with my brother in Kumasi. My mum was somewhere. So I started hawking in Kumasi. I used to sell sugarcane and worked at a chop bar. Sometimes, the leftover is what my brother and I take for support.”

“I used to wash the utensils and do the cleaning at the chop bar.”

“My mum used to sell the ‘bofrot’ and she had debts to settle. So, I thought it was wise to come and take over from her and clear the debts.“

“The business was lucrative and that helped me settle her debts.”

Former senior banker turns cleaner in the UK after relocating

A former senior banker of one of the big banks in Nigeria has chosen a cleaning job in the UK over the white-collar, air-conditioned job in her home country.

The person going by the name of Floxy Obi notified users on social media that she is currently employed as a cleaner.

She uploaded a video of herself cleaning a living room in uniform to TikTok and noted that the reality overseas is very different from what many people think.

Floxy bemoaned her situation and admitted that, despite having a master’s degree, finding white-collar work was still difficult for her.

She described how, while working in Nigeria, she used to ask questions of young bankers.

Furthermore, the former banker asked Nigeria’s leadership to make the nation modern so that no person would need to leave.