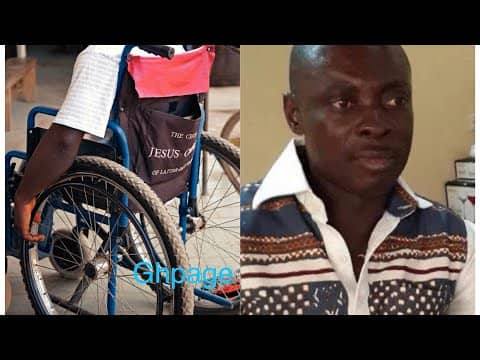 According to a report we made last week, a man revealed that Sofo Kyiri Abosom, is currently sick and needs prayers urgently to heal him.

According to the man who made the revelation, his child was possessed with an evil spirit and as a parent, he tried his possible best to find a solution to his child’s problem by taking her to various popular pastors in the country.

He stated that immediately he arrived at the premises of Osofo Kyiri Abosom, the man of God after seeing the child got up and told him he has close counselling for the day.

The possessed spirit then told him(Kyiri Abosom) that if he moves or tries moving his car it won’t work and truly he tried and it didn’t work.

Kyiri Abosom then left his church premises in a taxi but the spirit in his child led them to the house of the pastor where it challenged him that he was not a true man of God.

The man continued to explain that, his daughter hit Kyiri Abosom‘s chest three times and since then the pastor has been sick and even at the point of death.

But in a video sighted by Ghpage.com on Royal Tv, the man of God who is known for destroying deities with his God-given powers denied being sick. This was revealed by host of their popular Dawuro Maakye program.

It must, however, be noted that some checks by Ghpage.com revealed that Kyiri Abosom, truly hasn’t been well.

Sources close to the pastor as at the time we spoke to them disclosed he was mostly been moved around in a wheelchair because of his sickness.