Angel Obinim’s wife destroyed his friendship with Obofour & One Blow 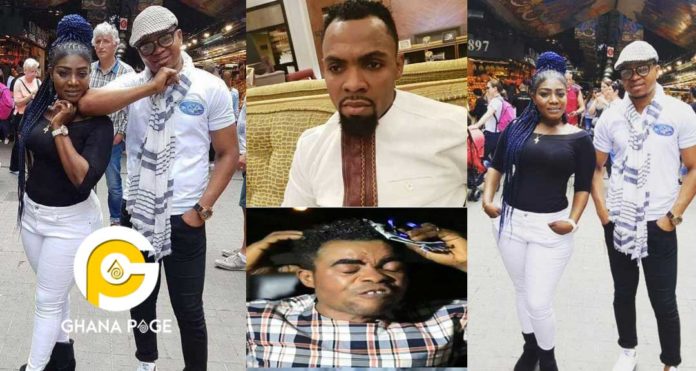 For a while now, it has been stated by several people who have had an encounter with Obinim which did not go well explain how Florence Obinim has Angel Obinim under his thump and tells him who to associate with and what not to do.

It is no secret that Rev Obofour is now the number one enemy of Bishop Daniel Obinim and vice versa. But it will interest you to know that Obofour and Obinim were very close friends a few years ago.

Obofour was always at the airport to welcome Obinim when he returns from Accra and both visited each other at home. Even When Obinim was arrested for assaulting a media person and was sent to court, Obofour and Badu Kobi stood by his side and went to court with him.

They were very close friends until Florence Obinim decided the friendship was enough; She does not want it anymore. According to Obofour, it all started when he paid a visit to the police cells to stand by Obinim when he was arrested the second time.

SEE ALSO: Angel Obinim enjoys a vacation in Dubai with his wife Florence Obinim-shows off properties

But he received a cold reaction from Florence Obinim when he got to the police station. After Florence’s reaction, he saw Obinim’s church members give him a cold attitude as if he was the one who got Obinim arrested.

From what Ghpage.com has gathered, Florence told Obinim and the church members that Obofour was there with the sole purpose to take a look at him just to go and ridicule him so he should be avoided. As to what else Florence told her husband in the bedroom is unknown. Obinim and Obofour have been enemies up to date.

SEE ALSO: Obinim weeps over One Blow for betraying him in a recent interview

When Pastor Baah aka One Blow, the Junior pastor of Obinim received a car from Obofour and the subsequent brouhaha that followed occurred, One Blow granted an interview with Kofi Adomah and revealed that Florence Obinim sacked him from the church.

One Blow revealed that Florence Obinim told his husband that One Blow was taking all his glory and as a villager as One Blow is, he does not deserve to gain all that glory so he should leave.

SEE ALSO: My wife lost her mind after she was falsely accused by Florence Obinim-One Blow

One Blow claims Florence Obinim went as far as framing his wife up just to disgrace them in order to get them out of ‘her church’.

Just watch the pastors making the allegations below

So you see, Florence Obinim is not as oppressed as many people think she is at her house. She holds the power, she knows it and she displays it when it pleases her.

Recently, Obinim opened a new branch in Spain and from what Ghpage.com has been told, Florence Obinim will be the head pastor at the church with an occasional visit from Bishop Obinim. Already, all his family has moved to Spain.