He was a footballer and not Sakawa: Man details sad story of viral Kejetia Sakawa Video 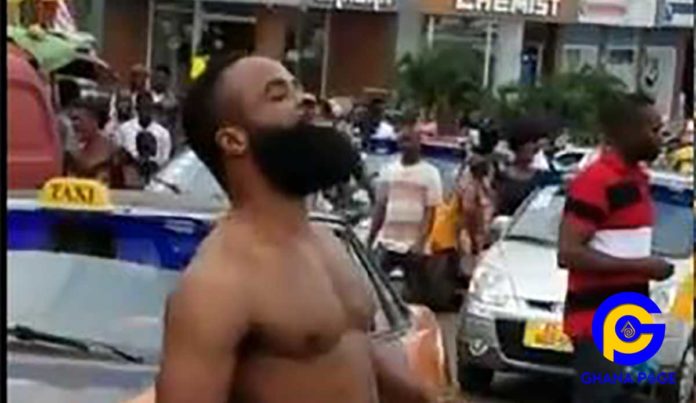 Last week, a video surfaced on social media where a young man was seen chanting and behaving weirdly at Kejetia market in the Ashanti Region of Ghana.

In the video, one man was giving commentary accusing the young man of being a ‘Sakawa’ boy and his weird actions are as a result of his inability to perform some sacrifices to pacific the spirits.

A few hours after the news went viral, a social media user with claims to be the brother of the young man explained that his brother is not a ‘Sakawa” boy but rather having some mental problem they are still trying to find a solution to.

Well, GhPage.com has sighted a new video of another man who claims to be closer to the family sharing the sad truth of what led to the young man’s current situation.

According to the man in the video, first of all, the boy is not a ‘Sakawa’ boy but rather a footballer who plays in a foreign league and had papers to stay legally in the country but couldn’t take him back to the country should he travel out of that country.

He added that the young man came for a visit to Ghana and that was where his woes started.

The man revealed that on reaching the Kotoka International Airport he was bounced by the officials and that is what has caused all this problem for him.

He also in the video showed some pictures of the young man during his days abroad.